I was sorting through some old papers at the weekend and came across a couple of copies from the census forms from 1901 and 1911 in Ireland. They were so simple compared with the 24 page forms of the present day. Alas they are far from what is considered politically correct in this day and age.

RETURN of the MEMBERS of this FAMILY and their VISITORS, BOARDERS, SERVANTS, ETC., who slept or abode in this House on the night of Sunday, the 31st of March 1901. 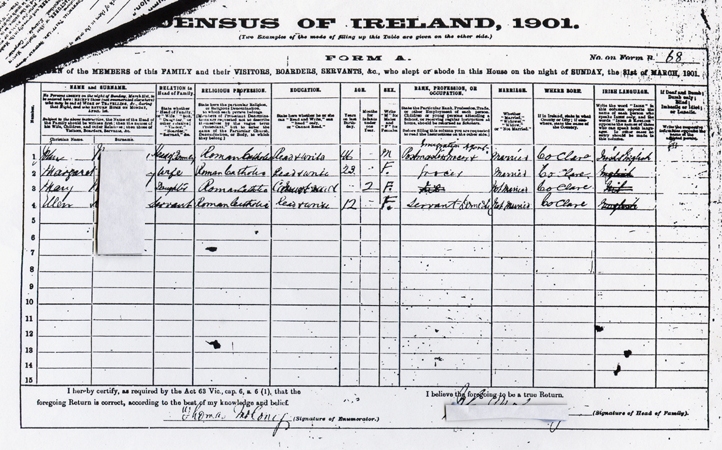 The Name of the Head of the Family should be written first; then the names of his Wife, Children, and other Relatives; then those of Visitors, Boarders, Servants, Etc.,

Column 2 – Relation to Head of Family.

State here the particular Religion, or Religious Denomination, to which each person belongs. [Members of Protestant Denominations are requested not to describe themselves by the vague term “Protestant,” but to enter the name of the Particular Church, Denomination, or Body to which they belong.]

State here whether he or she can “Read and Write,” can “Read” only, or “Cannot Read.”

This is divided into two columns. A) Age last Birthday & b) Months for Infants under one year.

State the particular Rank, Profession, Trade, or other Employment of each person. Children or young persons attending School, or receiving regular instruction at home, should be returned as Scholars.

– Now ladies take a deep breath as we look at this one.

In the 1911 Census the following note is added to this column:

[No entry should be made in the case of wives, daughters, or other female relatives solely engaged in domestic duties at home.]

If in Ireland state in what County or City; if elsewhere, state the name of the Country.

Write the word ‘Irish’ in the column opposite the name of each person who speaks Irish only, and the words ‘Irish & English’ opposite the names of those who speak both languages. In other cases no entry should be made in this column.

If Deaf and Dumb;

Write the respective infirmities opposite the name of the afflicted person.

I notice in this column in the 1911 Census, entered next my grandfather’s name is: Right leg amputated

15 thoughts on “Stand up and be Counted”