Over the years I have slept in many beds.

There was single, three quarter, double and King size.

I actually started my life in ‘Donal’s Cot’ as did my Elly, but that is a post on its own.

In my apartment in Wiesbaden, Germany there was a bed-settee in the living room. By day it was not recognisable as a bed. The seat was an upholstered mattress and the back rest was made of teak forming a hidden storage area for a duvet and pillows. It was used often and provided a comfortable nights sleep.

I have slept on fold-up & camp beds, and on one occasion while camping on Achill Island I slept in a tent, on a ground sheet with no bed! That bank holiday weekend in Achill, I went away with a bad cold. The mist was down and so thick we had to scramble around at snails pace. On the Monday we woke to glorious sunshine and I was able to see the scenery for the first time. Magically my cold had disappeared with the mist!

During one holiday travelling through mainland Europe, we were three young girls out to discover the world. We booked a room for the three of us everywhere we went, giggling about the adventures of the day as we waited for sleep to take over, was all part of the fun.

I remember spending a night in Liechtenstein where our room was enormous and contained four large beds. There was a door at the end of the room and when I opened it there was another room beyond with three beds. The only access to the three bedded area was through the first room. It was a wonderful elegant old building with high ceilings, elaborate plasterwork and each room had two heavy carved doors, the first one opened out to the corridor and once opened you discovered the other one that opened inward.

The Reception area was busy as we checked in, and we chatted and laughed while waiting for our keys and have our passports checked. We were told our bags would be delivered to our rooms in a few minutes. Elevators were not a necessity in those days. Having bounced on, and checked all seven beds I returned to the corridor to see if the cases had arrived. Several of the other guests were of the same mind and standing looking out of their rooms.

All of a sudden I was swept up in a strong pair of arms and carried down the hallway squealing with laughter to a room where I was deposited in the largest cot I have ever seen! The cot was placed at the foot of a King sized bed and was the full width of it. The strong arms were attached to a good looking gentleman who had checked in at the same time we did. He had heard me laugh and decided that I was a ‘fun’ person! The girls finally came in search of me, and only then was I lifted out of the cot! We had a good laugh about it and later at dinner the nice man had a bottle of wine delivered to my table.

Another comfortable bed I shared with my husband was during a self-catering holiday in Denmark. We were staying on a Pig farm! We were in site of the pig houses and there was something missing…… There was no smell! We only became aware of the piglets ten minutes before their feeding time. They started to squeal to remind the farmer it was time to eat. Once he appeared they stopped. Denmark provided wonderful memories and perhaps someday will be the topic of a blog post or Podcast.

Finally I come to the bed that inspired this post. 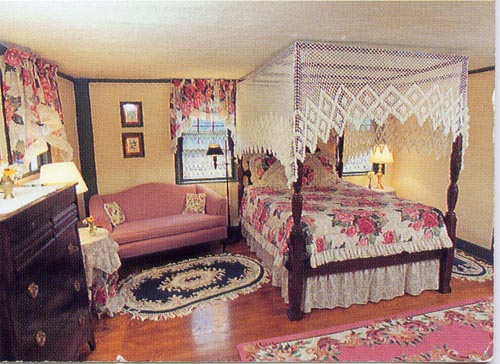 I made my one and only visit across the pond to the United States of America in November 2003. I was there to attend a family wedding. The Bride was from Cape Cod and the Groom’s family (my relatives) had taken a wonderful house Crocker Tavern in Barnstable Village on the Cape for the duration of the celebrations.

The bed I slept in was a great big Four-poster pictured above. The Bride’s mother called to meet us the morning following our arrival. We sat and had coffee at the dining table and she was able to tell us that her husband, the father of the bride had made the table. It was a work of art and he only uses recycled wood for his Studio Furniture. 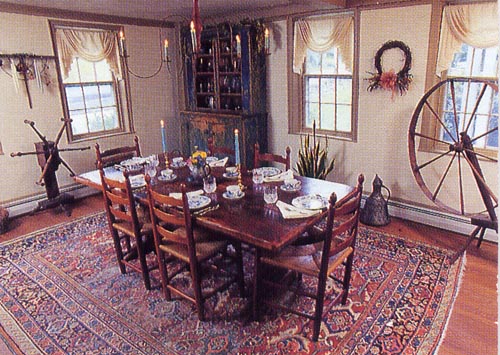