As the year draws slowly to its close, we all regardless of age seem to look back over the events of the past year, remembering lost loved ones, re-live our celebrations, rejoicing over achievements, tiptoe past disasters and move on to plan for the year ahead. 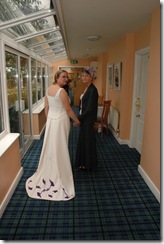 At first glance sewing seemed to overtake if not punctuate my year at every available space. In fact it was actually a year of great variety. In March I attended the Irish Blog Awards in Dublin, where I had the opportunity to meet with other Bloggers with amazing talent. A week later I turned sixty and officially become a senior citizen.

Over the months many hours were spent talking to Elly simultaneously on the phone and internet working through suggestions, ideas and plans for the wedding.

Moving forward to May I was approached on Skype and asked to help a young man in Italy to improve his English. I almost said no, but now we talk regularly and I think at this stage he can be counted as a friend.

The Wedding in June brought family and friends from across the globe to help celebrate and witness Elly & George’s Special day.

The weather was kind and Elly looked happy and glowing in her outfit. She said that it was very comfortable to wear and gave her the freedom she wanted.

The train of her outfit was detachable and was removed for dancing.

The end of June was rather scary with an emergency trip to hospital but thankfully I have recovered, and learned yet again to listen to my body! By the end of September I had sufficient energy to attend Podcamp in Kilkenny. It gave me the opportunity to learn and share, while renewing old friendships and making new ones.

November saw the passing of Cherry the mother of my new Son-in-Law George. I know that with Elly by his side, and the love of his father and siblings to share the great loss, George will feel the smile of sunshine on his face once more and hear and enjoy the birds singing.

Back in July I quietly marked the 30th anniversary of the day I married. Sadly, and not by choice, I have been alone for a third of that time. When Jack was alive our world was wonderful and I am thankful for warm loving memories.

The mention of marriage reminds me of a radio interview I smiled at over the holiday, an 80-year-old lady was the focus, because she had just remarried — for the fourth time.

The male interviewer asked her questions about her life, about what it felt like to be marrying again at 80, and then about her new husband’s occupation.

He’s a funeral director,’ she answered.

Interesting, the young man thought. He then asked her if she wouldn’t mind telling him a little about her first three husbands and what they did for a living.

She paused for a few moments, needing time to reflect on all those years.

After a short time, a smile came to her face and she answered proudly, explaining that she’d first married a banker when she was in her early 20’s, then a circus ringmaster when in her 40’s, later on a preacher when in her 60’s, and now in her 80’s, a funeral director.

The interviewer looked at her, quite astonished, and asked why she had married four men with such diverse careers.

She smiled and explained, ‘I married one for the money, two for the show, three to get ready, and four to go.’