I have often repeated the phrase: ‘Be careful what you ask for, because you just might get it!’ Well today I did get what I asked for.

I was looking for something to smile or laugh about, and I hope you can hear me right now. My eyes need wipers on the fast speed.

While checking through the 83 subscriptions in my Google Reader I came across this beauty from Guardian Unlimited.

A large pair of knickers saved the day in northern England after they were used to smother a household kitchen fire.

Jenny Marsey’s size 18-20 cotton briefs were used to put out a frying pan fire, which started when an extractor fan fell on the cooker while her son and nephew were frying some bread at the house in Hartlepool. 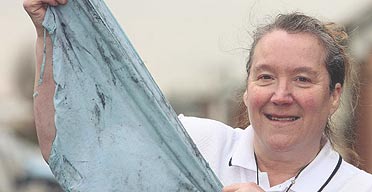 Jenny Marsey from Hartlepool holds up her size 18-20 knickers

which were used to stop a fire at her home. Photograph: Owen Humphreys/PA

Jenny aged 53, said the blue cotton knickers were from Marks & Spencer, and were a few years old.

“I call them my emergency ones,” said Jenny 53 and the mother of four. “They’re the ones you wear when you’ve run out of all your others!”

These M&S Knickers were good enough for Margaret Thatcher and Bridget Jones!

Nominations for the Irish Blog awards 2008 are now open.

The rules are different this year.

You, the Blog readers get to work at this stage. Think back over the many Blogs and blog posts that caught your heart or attention since last March. Remember the ‘Archives’ on each blog are there to help you.

You fill in the form for the category you think your choice is most suitable. Any person that nominates a blog for every category will have their nomination treated as spam and that nomination will be deleted.

“New nomination system, new judging system and a restriction on the number of categories you can be nominated in. This means there’s more chance for smaller blogs to get through and combined with no public vote this year, it means it’s not a popularity contest that gets you to the second round. So, to be clear, all nominated blogs will get judged in round 1 and whittled down and some will go forward to round 2 where the judging gets a lot tougher.”

There are so many blogs of talent that have come to my notice in this last year. There are a couple that have brought me to tears on many occasions, sometimes tears of joy or fun, and at others tears that pulled at my heart strings. I need to go re-read and whittle them down.

Good luck to all and may the best person win.