Originally in the form of a Podcast, not gone, it tells the story of the power of love between a child and his or her favourite toy. Thankfully, I still have the text version…..

There was once a velveteen rabbit, and in the beginning he was really splendid. He was fat and bunchy, as a rabbit should be; his coat was spotted brown and white, he had real thread whiskers, and his ears were lined with pink sateen.

So begins the story of ‘The Velveteen Rabbit’ written by Margery Williams and first published in 1922. It tells the tale of the power of love between a child and his favourite toy. It’s a book I remember reading to my little Elly sweet smelling and fresh from her bath and all tucked up warm and cosy in bed.

The Rabbit and the Skin Horse were lying side by side near the nursery fender and talking.

“What is REAL?” asked the Rabbit. “Does it mean having things that buzz inside you and a stick-out handle?”

“Real isn’t how you are made,” said the Skin Horse. “It’s a thing that happens to you. When a child loves you for a long, long time, not just to play with, but REALLY loves you, then you become Real.”

“Does it hurt?” asked the Rabbit.

“Sometimes,” said the Skin Horse, for he was always truthful. “When you are Real you don’t mind being hurt.”

“Does it happen all at once, like being wound up,” he asked, “or bit by bit?”

“It doesn’t happen all at once,” said the Skin Horse. “You become. It takes a long time. That’s why it doesn’t happen often to people who break easily, or have sharp edges, or who have to be carefully kept. Generally, by the time you are Real, most of your hair has been loved off, and your eyes drop out and you get loose in the joints and very shabby. But these things don’t matter at all, because once you are Real you can’t be ugly, except to people who don’t understand.” 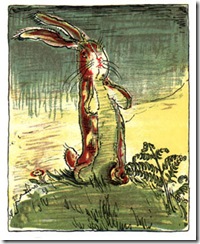 Sammy came to live with us a very long time ago.

It was when we had a tiny new baby girl. Friends and relations came from far and wide to meet her. Jen my four year old niece, tip-toed over to the pram and peeped in at the sleeping baby, I lifted her up to kiss her newest cousin and she caressed the tiny fingers on the baby’s hand. Before moving away Jen lifted a little bundle to her lips, kissed and whispered a private message, before placing the very special little gift in the pram beside baby Elly. It was a little orange and white squirrel. The white tail formed a handle along his back and was just big enough for a little girl’s hand. We called him Sammy Squirrel!

Sammy and Elly were never far from each other. She carried him about the house, he came to town and for drives in the car he even travelled on holiday with us every year. He was a good listener and heard all her secrets, at times he was soaked in tears if she had a bad day, but best of all was being held tightly as she slipped into dreamland. He was the friend she saw last thing at night and first thing in the morning.

Now Elly had a second passion when she was crawling about on the floor. It was playing with Mammy’s bag. If I left the bag down she made a beeline for it. Each item was removed squeezed, shaken and chewed before moving on to the next one. It was at the stage where babies put everything into their mouths. We were going on holiday so I decided to buy her a bag for herself when we got there.

Jack thought I was suffering heat stroke but went along with my idea. We were in Spain and leather bags were very reasonable. I wanted something that would hold Sammy, a small book and a game. As soon as I saw the bag I new it was just right, light colourful and appealing to a child. It became known as Sammy’s Bag and she packed it every time we travelled. 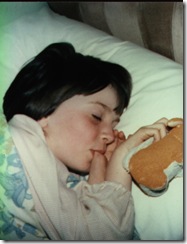 Eventually the bag was relegated to the back of the wardrobe. It held far too many memories to just dump it. Sammy sat on the bed and patiently waited for his best friend to come home from school. Somehow he managed to climb into the case for school trips and again when Elly moved to Scotland. He spent a year in France with Elly but I am not sure if he picked up any French!

I asked the other day if he was still about and sure enough a picture travelled across the web to assure me that not alone was he still around but his bag was there as well. 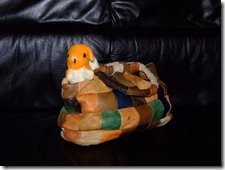 I wonder if George knows he has competition?