This post was originally in the form of a podcast but alas it has expired.

Thankfully I had kept a copy of the text and reproduce it here. 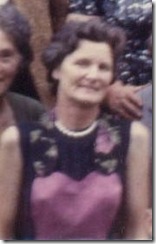 When you think of your mother, how and where do you imagine her? For me it has to be in the kitchen wearing a pinafore with hands covered in flour while baking, or standing at the cooker stirring or checking a saucepan or casserole dish before moving on to the next stage of preparation of a meal.

Yesterday I walked down the hill to post a letter before calling into the bank to say hello to my two penny worth! On the trudge uphill in the driving rain late in the afternoon, I was reminded of all those far off days walking home from school is similar weather. The big difference was that I had to think of and prepare my own dinner when I reached home. In my school days most of the dinner was started and I helped with the vegetables and dessert before laying the table.

We never knew what to expect for dinner until the front door opened and the aroma wafted like the Bisto Kids advert from the kitchen. If you were not hungry before you crossed the threshold, then you certainly were ravenous by the time you closed the door on the inside. It was so inviting, that the taste buds went into overdrive you could eat the table never mind waiting for the food to be served.

Our meal usually had four parts, soup, main course and sweet of hot apple or rhubarb tart with cream or in winter rice, tapioca or bread and butter pudding. The last three I passed on but made up for it with the warm cake straight from the oven to go with a cup of coffee or tea. It is a miracle we were not all obese instead of matchstick figures!

Soda and wheaten bread (known in our house as Daddy’s bread and brown bread respectively), scones, plain, wheaten, or fruit were made every day. In winter we had griddle bread, Daddy complained, didn’t he always! The griddle bread did not taste like the bread his mother made, well why would it, granny made it on a griddle over an open turf fire.

Mammy used a wide heavy cast iron frying pan on the gas stove. One day while stoking the fire she had a brilliant idea! She covered the bread on the pan with an old wide saucepan lid and lifted some smouldering turf from the fire and placed it on the pan lid. The turf helped cook the bread from the top and added the smoky flavour. From then on we had authentic flavoured griddle bread every time! You had to be quick on the draw because that bread disappeared fast. I wonder if this is why we all have long arms.

Shortbread, mince pies, brack, Victoria sponges and fairy cakes (cup cakes) or feckies as we called them were all a regular part of her repertoire.

It is the main meals I remember most. It is hard to credit that mammy was unable to cook anything when she was newly married. In fact she often told us that she had nightmares on honeymoon thinking about having to cook when she moved into her new home.

Yet mammy could do the loaves and fishes with ease. I saw her feed the hoards of relations that descended unannounced on a regular basis. There were roasts, stews, casseroles, bacon & cabbage and on a bitter winter evening nothing better than coddle!

Coddle was a Dublin dish, jokingly referred to as a ‘Whore’s (pronounced Who-are) breakfast!’ It consisted of onions, the fattest streaky bacon and pig’s kidney. Some people added pork sausages we never did. It was put on to boil early in the day and once it reached boiling point the heat was reduced and left to simmer away slowly for several hours. When it was well cooked the juice was thickened and seasoning checked. The nickname came from the joke that the difference between a whore and a prostitute was that a whore gave you breakfast! These generous ladies were thought to put the pan of coddle on to simmer before entertaining their guests for the night and when the gentlemen were preparing to leave a hearty breakfast was served.

In our house coddle was served with an enormous dish of boiled potatoes and there was always a sliced loaf to mop up the gravy when the potatoes were gone. Remember the five men in our house would eat at least five large potatoes each! Then you had mammy, my sister and yours truly as well!

I have decided to have a ‘food-ie’ post once a week. Please don’t ask me to post pictures as that is not my scene. In over 50 years of cooking, yes I started when I was about seven or eight years old, I have collected plenty of recipes and ideas. I have said it before and I will say it again mammy never possessed a weighing scales until I bought one. She happily measured by handful, spoonful or pinch. I remember making an egg sponge cake with 3 eggs, three tablespoons of caster sugar and 3 tablespoons of self raising flour. I beat it with an egg whisk! Somehow it worked.

Mammy cooked by the feel, the look or the taste of a mixture. Only once do I remember a disaster. She produced a wonderful great big apple tart, only to discover that in a distracted moment she had sprinkled bicarbonate of soda on the apples instead of icing sugar before putting the pastry lid on it for cooking. It was the one and only time I remember food being returned to the kitchen uneaten.

I spent many hours in that kitchen with mammy and hopefully some of her good sense rubbed off on me. Somebody once said to me “Well if you can read you can cook!” A cookery book does not teach you about aroma, tasting or producing food, that is an act of love!

15 thoughts on “Where was your Mother”