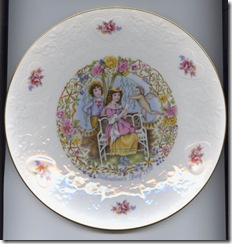 You’ll ask me if I loved you

If once I loved you dearly

I loved you once,

I love you now

I love you most sincerely

Though time is on the wing,

As all the world agree

It has not borne away

The love I have for thee

These words are from the back of this Valentine Plate 1978

A man from New York and his ever-nagging wife went on holiday to Jerusalem. While they were there, the wife passed away. The undertaker was called and he told the husband “You can have her shipped home for $5,000, or you can bury her here in the Holy Land, for $150.”

The man thought about it and told the undertaker he would just have her shipped home.

The undertaker asked, “Why would you spend $5,000 to ship your wife home, when it would be wonderful to be buried here and you would spend only $150?”

The man replied, “Long ago a man died here, was buried here, and three days later he rose from the dead. I just can’t take that chance…