The quick answer is Yes, I have been known to commit stitches to needles at times over the years. My bones do as well! 😉 They had the chance to prove it a couple of years ago when I broke my wrist!

First off there was the strip of garter stitch on the short plastic needles in wool that started out as my ‘most’ favourite colour and then some months later became the one colour I hated for life! My problem with the strip of school knitting was that I never managed to have the same number of stitches on any one row. I think the ideal was twenty, while I had 18 or 19 with a lacy pattern (dropped stitches or holes), then later magically the stitch count was 21. Mammy spent hours sitting in front of the fire showing me what to do. I remember the rhyme: ‘In around, out and off’. It sounded easy but never seemed to work for me.

Brother No.2 was quietly watching these lessons one day and then disappeared. Ten minutes later he was back! “Is this the right way mammy?” he asked. He was back with two wooden skewers that had started life in joints of meat from the butchers and a ball of string! Are you allowed to hate your brother? He was standing there with a strip of garter stitch as long as his arm and there were no dropped stitches!

Then there was the year we were learning to make socks! We learned to turn the heel and fashion the toe. They took me the whole school year to complete and then a brother would only wear them inside his Wellington Boots. I did improve and made several cardigans and jumpers for myself. 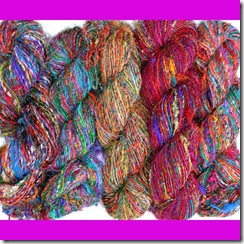 Recycled Sari Silk is popping up on the web. Generally sold by the ounce, every skein varies greatly in its colour way, gauge, twist and texture. This yarn is 100% silk in a myriad of vibrant colours.

It is imported from Nepal, where it is spun from the snipped ends of saris into this wonderful textured yarn. Each skein is unique in its colour ways and natural inconsistencies of the fibre, turns the simplest project into something very special. The women use these skills to provide additional income for their families.

It is noted that some of these yarns have a certain ‘aroma’, in other words ‘The yarn starts out dirty and musty’, It is recommended that the silks are hand washed and dried before knitting up; this loosens the fibres making it softer and nicer to knit with. Most web sites recommend if you are making a big garment that you knit a couple of rows from each hank alternately to prevent obvious colour-banding.

I have not found it in any wool shop here in Northern Ireland. I don’t know of anyone who has tried to use it. I would like to buy one skein to play about with, but on line it comes in bundles of at least ten. Did you ever hear of it? Have you used it?