They have put me on the list when I thought I would be missed – with apologies to Gilbert and Sullivan.

I am suffering from a touch of ‘déja vu’ right now. I want to say ‘You Could Knock Me Down With a Feather’, but I said that last year at this time for a very different reason!

Now in 2008, I am once more on the list of finalists’ for the Irish Blog Awards in the categories of Best Personal Blog and Best Blog. How did that happen? What did I do to deserve it? I just come out to play each day fluttering about like a butterfly, pausing for the moment with whatever takes my fancy. It might be serious or it might be fun. Blogging has taken me through some very dark and frustrating days. When I am unable to get out among real people, the blogs bring them IN to me. You are my teachers; I read your blogs and learn from your writing. You comment on what I have to say, correct me when I am wrong, support me if you think I am right and thank me endlessly if I share some little known fact with you.

In short you are MY FRIENDS!

Elly, you are my flesh and blood and I am very proud of you. Being related to me means you suffer a little of my madness. I really believed you were certifiable on the September day in 2006 when you first suggested that I should learn to Blog and Podcast. If I have not told you already, I am telling you now, it was the best suggestion you ever had for me! Thank you for the introduction to the sport and for opening the gates to a whole new world.

I wish to pay tribute to Damien Mulley, who with such enthusiasm and energy, working endlessly in the background over several months, has organised this event for the second year running.

To those unknown generous people who thought enough to nominate me in the first place, and to the team of judges who willingly gave of their time to read, mark and inwardly digest all the 788 nominations, trimming them down to 281 blogs or posts for the short-lists and again wading through them to produce the list of finalists that we have today. The competition is still very stiff. May the best people win!

Finally, I wish to thank all the Sponsors for their generous support, without you, Damien’s vision would fall on stony ground and the event not happen. Your sponsorship gives encouragement to a great variety of talented people from many walks and ages of life.

Eamonn at Flowers Made Easy is holding a Mothers Day Blogging Competition with a prize for the best blog post about your Mum.

So if you have a happy, sad or fun story about your mum or about Mothers Day simply blog about it and add a link to http://blog.flowersmadeeasy.ie/eamonn into it the post and you will be included into the competition automatically based on your link back. You can add a “no follow” into the link if you like. We just think that it will be the easiest way to see who has entered the comp.

I have written and made Podcasts about my mother several times over the lifetime of my blog and sending her flowers would be difficult since she died in 1996. Thankfully I will be away from home as the month turns to March and not quite sure when I will return. Flowers do not like living out of a suitcase any more than I do! Nevertheless I have a little story to add to the collection. The story is a true one and names have been changed. 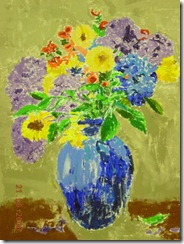 As Marcia approached her 40th birthday she decided that it was time to make some changes. After all ‘Life begins at 40’ or so the saying went. Since her mother died she had lived alone in the family home. Her siblings were all married and she had plenty of young nieces and nephews to visit and play with whenever she felt like it. Offers to ‘baby-sit’ were gratefully accepted.

Having finished her chores for the day, she poured a drink and pulled the armchair a little closer to the fire. As she mused over the possible changes she might make, the phone rang. It was Lucy. Marcia and Lucy had travelled through most of their lives together since that first day at school where they were put sitting side by side. They first shared pencils then books & games, later it was sleepovers during holidays, chatting for hours about their hopes and dreams.

Marcia watched as Lucy met her sweetheart and fell in love. Mark was a fine tall handsome young man and soon he and Lucy had set the date for their wedding. Marcia never hesitated when she was asked to be bridesmaid and was helpful and efficient in everything she did. That was twelve years earlier and somehow love with that special person had eluded her.

Lucy sounded rather excited on the phone. They talked for ten minutes and then hung up. Marcia pondered over the conversation. Lucy had called to say that one of the girls in the office was leaving and that her boss was looking for someone to take over the position at short notice. Lucy had recommended Marcia and promised to call her. Now she was setting up an interview.

The interview went well and Marcia decided to make this the first step on the road to change. She was working directly with John and they made a good team, after a couple of weeks she realised that she looked forward to going to the office. John showed appreciation for all her endeavours. He invited her for dinner and she accepted. The talked easily together and she learned that John was a widower with 5 children. His wife had died with the birth of the last child. He was bringing them up with the help of family.

Time passed and the working relationship turned first to friendship and then to love. Marcia met the children and slowly they began to welcome her. John asked the all important question and Marcia said yes! The children were involved in all the preparations and looked forward to the wedding. Marcia & John were married with family and friends gathered to celebrate. The children stayed with grandparents while John took his new wife on honeymoon.

That night Marcia’s dreams were shattered. John had a heart attack at the dinner table and died. Marcia so soon a widow had to break the news to the children and all the family. The children were bewildered and blamed her for the death of their father. They gave her a very hard time over the next few years. Many times she felt like walking away, at one point she even packed her bags, but she didn’t leave. She stuck it out, slowly the grief eased and one by one the children grew closer to her. As they grew older they realised the sacrifice she had made for them, a sacrifice borne from true love.