I am home once more the case is unpacked, washing done, emails read and a good nights sleep later it is time to tell the ‘true’ story…..

Do you really want to know what happened in the week? But I told you already>

1. Finally after 30 years in Northern Ireland I became an Orange woman!

2. I was given a red carpet welcome to Dublin.

3. I was dipped, stripped and went a step further than Cleopatra!

5. I shared a stage with Grandad.

6. I had Toyboys falling to their knees and shared a couch with Twenty Major!

7. I won an arrangement of beautiful flowers

8. My computer doubled in size.

Now if it is details you want….. well, you have behaved well in my absence and I heard not one raised voice!

The VODKA can wait for the moment and I will begin at the end.

You will notice a new Irish Blog Awards logo over on the left. Thanks for it are due to Robin from ByteSurgery, a worthy winner of the Best Technology Award. Robin’s mum Steph from The Biopsy Report also a finalist for Best Personal Blog, was a real kindred spirit and we had a ball on the big night. A mention is also due to Robin’s sister who sat patiently while I introduced Steph to all my Toyboys!

Elly my beautiful one and only daughter who almost stayed in her top on Saturday night, entered a competition sponsored by Eamonn from Flowers Made Easy with a post entitled ‘My Mum’. Whether you believe the rubbish she wrote about me is your choice, I did not recognise ‘little old me’ in there at all! She has three mothers you know, so maybe it was about one of them! 😉 I’m keeping the Flowers! 😀 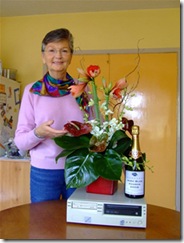 The Flowers were beautiful and to prove it we have a picture taken by Elly with my camera. Since she is packing in readiness to move house it was difficult to find a space among the boxes to display them properly. She won the arrangement for blogging about her blogging mother so I thought on top of my computer hard drive would be ideal. Thank you George for the new thingy-whatsits you found time to add into it for me. The innards are now double the size they were before I went to Dublin. The only trouble now is, the ‘puter is working faster and I have no excuse for not doing things on it.

The Grand Reserve Brut, by Bubble Brothers and sponsored by Hosting 365 in the picture, was part of every Award Winners booty on the night, it is the only part of my prize that I have home with me. Every winner in each category received a Crystal Glass Award, the Bubbly and a DVD Player, the latter sponsored by moviestar.ie. 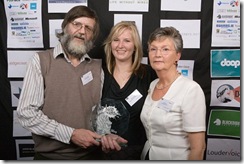 Since I was a joint winner with Grandad from Head Rambles for the Best Personal Blog sponsored by Microsoft and presented by Martha Rotter there was only one award and he has that, well he needed a paperweight for his bills! 😉 I have no TV (by choice) so I passed on the DVD Player to someone who did Trojan work on the day. That is why I am unable to show pictures. The recognition of my peers is more than enough for me. Trophies need cleaning and dusting and that might take me away from blogging, we wouldn’t want that now would we?

The photo with Martha is from Rymus the official photographer on the night and there are plenty more if you click on his name.

A study conducted by UCLA’s Department of Psychiatry has revealed that the kind of face a woman finds attractive on a man can differ depending on where she is in her menstrual cycle.

If she is ovulating, she is attracted to men with rugged and masculine features.

However, if she is menstruating, or menopausal, she tends to be more attracted to a man with duct tape over his mouth and a spear lodged in his chest while he is on fire.

No further studies are expected. 😉