Do you ever wake up and think I would love a new house? Sometimes I let my mind wander and think of all the different options there are available in today’s world.

While out for a walk I found the ideal new home.

What do you think? 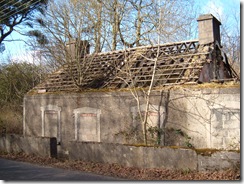 The bathroom looked large and airy 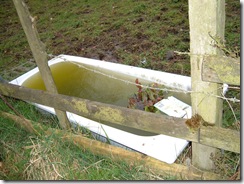 Pity it was across the road! 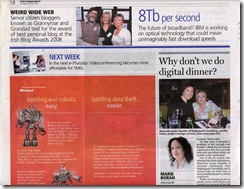 You will remember my Post about it and the follow up Apology Huh! I know you eagerly await the outcome so let me recap.

I emailed a letter to the Editor of the Irish Independent because I took exception to the photograph of Grandad & I with Martha Rotter of Microsoft at the Irish Blog Awards 2008, appearing directly under a heading ‘WEIRD WIDE WEB’. I copied my email to my daughter Elly. What is so weird about blogging or the fact that I a sixty-one year old woman and Grandad, who is in fact, a few years younger in age and by a month in blogging time, pass our time with this hobby? Both of us for our pains are rewarded regularly with comments. The wonderful faithful readers range in age from over 80 up to 18!

Yesterday afternoon as I worked about the house I heard the ping announcing an email. It is like the phone ringing, you want to know the details right away. This is what I received minus the email addresses and phone numbers which I removed:

I have read your blog post ‘Apology huh!’ and to answer you: I didn’t email you because your daughter, who alerted me to your letter requesting an apology from the Independent in the first place, said she would pass on the email directly to you and that you might be in touch.

As I said in the email, I didn’t create the caption ‘Weird Wide Web’, it is a pre-existing section for non-business related technology headlines. In the spirit of openness feel free to publish the email which I sent your daughter on your blog because as I have already said, I am not ageist in the slightest not would I ever wish to cause offence.

To clarify, the letter requesting an apology that you sent to the Independent would never have reached me because Silicon Republic is a separate entity that provides the independent with its technology news.

‘I didn’t email you because your daughter, who alerted me to your letter requesting an apology from the Independent in the first place, said she would pass on the email directly to you and that you might be in touch.’

Why would I be in touch? I did not know, and from the layout of the page it is not clear that Siliconrepublic.com is responsible for the content on the page. In fact there is a thick blue line under our photo separating it from the large advert and the article ‘Why don’t we do digital dinner?’ written by Marie Boran.

‘I didn’t create the caption ‘Weird Wide Web’, it is a pre-existing section for non-business related technology headlines.’

If the offending heading with the word WEIRD was pre Ms Boran, then I was correct in the first place addressing my correspondence to the Editor of the Irish Independent.

The second e-mail was sent to Elly (coincidently on my sixty-first Birthday) and not to me, therefore it was not mine to print here on the blog without permission.

Last week I phoned the Irish Independent and asked to speak to the Editor. I was informed that he was away and asked if I would like to speak to his deputy. She was not interested in hearing what I had to say she sounded condescending and her manner was almost rude. She informed me that it could take THREE weeks for the Editor to read an email???? Yes I did say three weeks!

Sorry for any offence caused by the heading ‘Weird Wide Web’ – that’s the section where eThursday does anything different ie not business related, but I can see how this caused offence to your mother. Tell her that I apologize sincerely and that I find nothing ‘weird’ about older bloggers and I am not ageist in the slightest.

Just to reiterate again, I didn’t write the caption ‘weird wide web’ – it is a standard label that is part of the eThur layout and was there before I even worked there but in order to get the blog awards and the fact that your mother won, into eThursday, I had to work around the standards that already exist.

I did write the text ‘Senior citizen bloggers known as Grannymar and Grandad tied for the award of the best personal blog at the Irish Blog Awards 2008’ but I do not see how this is offensive.

I will let the editor of eThursday know that your mother found it offensive to have her picture and name in the ‘weird wide web’ section and wants an apology printed.

I replied to Marie Boran’s email to me saying that my anger was not with her as a person, but with the use of the heading above our picture. I noticed there was no picture the following week under the heading and the nuns she mentioned and pictured in the main article were well away from it! But then they were using mobile phones and nothing to do with blogging! 😉

Did I get an Apology? I’m not Elly!

On one hand we are told that 60 is the new 40 and on the other we are past it and ready for the scrap heap! It is almost worse than being an adolescent!