I was missing for a few hours earlier in the week. I went to town.

On my travels I paid a visit to a couple of ladies well known in the area outside the Europa Bus centre. The wind in this part of Belfast has a habit of whipping around corners, yet these ladies had not a coat between them. 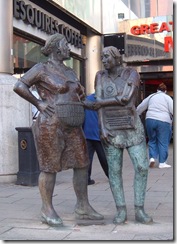 The Monument to the Unknown Woman Worker 1992 by Louise Walsh is a testament to all women workers both paid and unpaid. Various utensils attached to the two women represent their activities and include the shopping basket and the cash register. It is apt that the women appear strong and unshakable, battling on against low wages or no wages at all. Belfast owes its growth to the masses of female workers who built the largest and most famous linen industry in the world. Not to forget other women in factories, shops, and offices who struggled to support their families during the high unemployment caused by the “troubles”. Pause for a moment to admire the heroism of these two women, and who they represent. 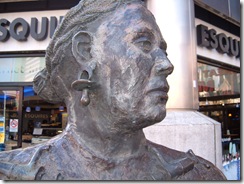 This lady has a work worn face, a child’s soother for an earring and cable knitting for hair with a ball of wool for the bun at the nape of her neck. 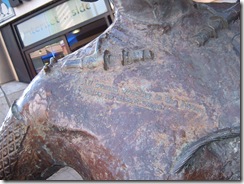 A water tap is embedded in the shoulder, a cheese grater in the upper arm and the following message:

All women working in the home receive no direct wage. 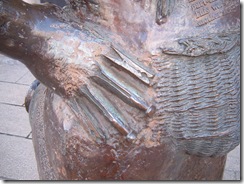 The fingers on the right hand are clothes pegs and the basket represented the time when women went from shop to shop for food before the days of Supermarkets and on-line shopping. 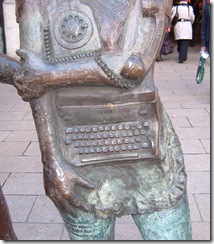 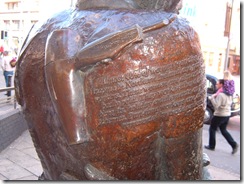 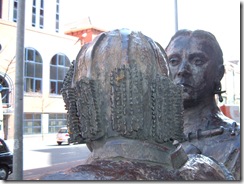 Across the back of the second lady is a hairdryer and the hair is like hairbrushes they come with the message:

Almost 40% of women working for income in Northern Ireland are part-time workers. These women are almost always badly paid. They work without having benefits, holiday entitlements or pension schemes. Part-time workers are also not represented by trade unions.