Back in March I wrote about an afternoon stroll with added photos of an old Flax Mill. Today I have another one. This time with a happier twist. 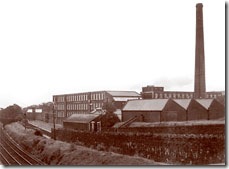 Now for a little history lesson with the help of Newtownabbey Borough Council.

Mossley was originally a bleaching establishment and carried on by a late Mr Thompson but ceased above 80 years back. It afterwards became a flax scutching establishment, next a cotton factory, which business was carried on by Stanton and Graham but ceased about 35 years back. It was next changed to a calico (cotton) printing establishment by the Messrs Grimshaw and remained so from about 1818 up to 1834, when it was changed to a spinning factory by the present proprietor (Edmund Grimshaw). The Ordnance Survey Memoirs 1839

After Edmund Grimshaw’s death, Mossley was mortgaged to the Ulster Bank until 1859. The property was then sold to the Gunning & Campbell Co. At the time of this sale the property was described as:

“Two mills for the spinning of flax and tow, 22 worker’s houses, manager’s house and garden with a dwelling house and grounds, ornamentally planted. The machinery of the mill was run by two steam engines with boilers (25 horsepower each with shafting and great gearing attached)”. The Ordnance Survey Memoirs 1839

Although the name Gunning appears on the deed of sale, he had little or nothing to do with Mossley. Soon after the purchase of the mill the name of the mill changed to Henry Campbell & Co.

Henry Campbell & Co. consisted of second cousins Henry and John Campbell. It appears that Henry provided most of the capital for Mossley Mill but John was the one who ran it. Henry retired soon after purchasing the mill and this left John as the sole proprietor. It was John who would make many changes to Mossley. He expanded the mill, village, set up the school and improved the conditions for his employees.

There are several reasons for the success of the mill. Although the Campbells invested in new buildings and machinery, they did not over extend. They remained with the part of linen manufacture they knew best – flax and tow spinning.

While many companies were diversifying into many other linen products, the Campbells remained specialised.

In addition, the company looked after its workers well, given the standards of the time. This good business sense kept Mossley competitive. It was not until the 1880s that the Campbells diversified.

It was around this time that thread making was added to the business.

In 1978 the mill was sold to the Hanson Trust and was then amalgamated with Barbour Threads of Hilden, near Lisburn. The joint company was renamed Barbour Campbell Threads Ltd and in the ensuing rationalisation all thread production was transferred to Hilden and spinning to Mossley.

In 1993 the site was bought by Herdmans, flax spinners at Sion Mills, Co. Tyrone. Mossley Mill finally closed in 1995 and virtually all the machinery was scrapped or sold. Newtownabbey Borough Council bought the mill in 1996 and phase 1 of the development opened in 2000 has the Council Civic Centre.

Phase 2 of the development includes a proposal for a heritage and arts facility which would consist of a heritage gallery, temporary exhibition gallery and education room. 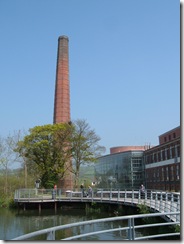 The chimney still stands and the new and old blend well together. There is a self service coffee shop open to the public on the first floor of the new extension overlooking the car park. What a pity it is not overlooking the lake! 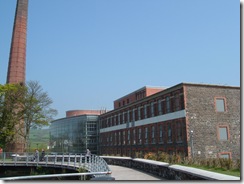 A little imagination can breathe new life into an old building, pity the walls can’t talk! 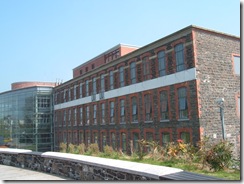 The lake had few visitors on the day I was there. 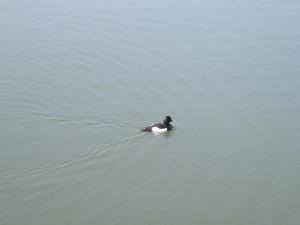 This little fellow kept disappearing, I think he was practising for the Guinness book of records to see how long he could stay underwater!