I keep saying it – Where would we be without our commenter’s?

A ‘Strange but True’ themed day was suggested by Steph, so get your thinking caps on while you read this and then share your story.

One bright September morning when I was aged four, mammy dressed me up and put a large bow on my hair. We were taking my older brother to school. At the time I didn’t realise that she wanted to enrol me for the following September. The school was run by an order of nuns and Sister Patrick the Principal, announced to my mother that she would take then and there that day! I had no time to prepare and Mammy left in shock without (at that time) her only daughter!

My teacher for the first couple of years was called Miss Kierce. Naturally when I came home I talked non stop about her. Daddy said to me that in his part of the country (Co Clare) she would be called Kearse and that I was to tell her. I think it was the first thing I said to her the next day. The banter went backward and forward through me, and we discovered that she was from Ennis in Co Clare, not many miles from Kildysart where my father was born.

Miss Kierce asked if daddy ever went down to Clare and precocious little me said “Of course he did, he went to see Granny Kildysart!” So the message came home: “Daddy Miss Kierce says; next time you are going to Kildysart will you drop her off in Ennis!”

Weeks passed and eventually daddy was arranging to go to Clare, so I again brought messages back and forth. Times and dates were sorted and on the day teacher came home from school with me and she and daddy set off on the journey. Driving from Dublin to Ennis at the mouth of the Shannon in the days before motorways, gave plenty of time for questions to be asked and answers given. Daddy’s first question to all young women was usually “Did I know your mother?” Daddy did not know her mother but discovered that he knew her Godfather!

Miss Kierce’s Godfather was daddy’s Uncle Jim! The same Uncle Jim who came to our house for lunch every Tuesday and stayed all day! 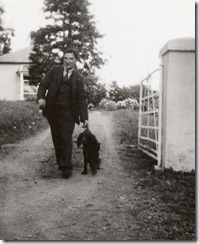 When I married Jack back in 1977, I wanted a simple wedding with no fuss. My friends were all well married and at 30 I was considered a very late bride (thankfully that silly talk has vanished)! I settled on a two piece outfit with crochet top and linen skirt in Ecru. It was right for me with my deep auburn hair. Jack as I have said before was older and walked with a slight limp due to injuries he sustained in Burma during WW11. Jack always referred to the injured leg as ‘the wooden leg’! He was a widower when I met him.

Walking up the aisle with Daddy who was ill. 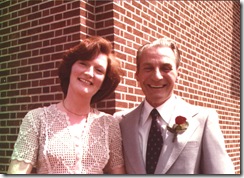 Now we are married!

Several years later my brother was researching our family history. On a visit to Co Clare he spent several hours looking at the archives of the Clare Champion, a local weekly newspaper. He sent me a copy of a cutting. It was a description of a wedding. The date was 30 Jan 1900 and the Groom a widower, was marrying a woman much younger than he was. She had auburn hair. The description of the bride’s outfit told us it was the same colour as mine. The Groom did have a wooden leg. How do I know? The bridal couple were my paternal grandparents. The bride was Granny Kildysart!

Now you must have a strange but true story to share with us. I’m off to buy a horse, I’ll talk to you much later!