While down south for the BIG MOVE a few weeks ago it was boxes here, boxes there, in fact there were even boxes in or on boxes everywhere! We worked our way through them until a pathway appeared across the room. I didn’t want to spend much time hanging around in case George decided to put me in one of the empty boxes, so I took a break and went chasing Toyboys to visit some Bloggers in the real world.

I arrived back one evening to find that the living room looked so much bigger, a complete wall of bookcases were filled, the chairs rearranged and the TV screen was sitting on the floor against a wall. The TV stand and coffee table were on order, the windows were bare, but it still felt like a bright inviting comfortable home.

Some friends called by and once the ‘tour’ was completed we sat and cracked open my IBA Bubbly. Before I knew it the screen came to life and a Wii game appeared. The Toyboy visitor jumped up to try it out. 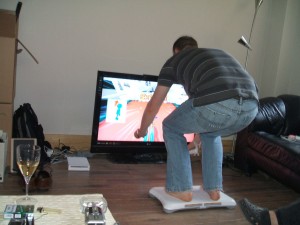 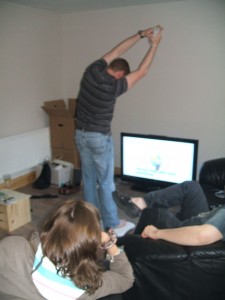 Then Elly said “Mum you are next!”

Me! What would I do that for? I was soon told to remove my shoes and socks and stand on the white box. 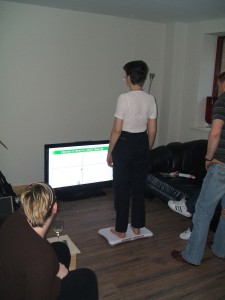 That daughter of mine is devious! The machine wanted my vital statistics…. my heigth, my AGE, but not what I had for breakfast. The machine must have a scales because it told them my weight. Then up popped a screen telling us my BMI was 20.07! Not half bad for an ould biddy! 😀

For the next part I needed to stand on one leg!!!

Since my right hip misbehaves I stood on the left one. Standing still causes me to topple so I agreed to give it a try so long as there was somebody ready to catch me if I felt dizzy. Thats my excuse and I’m sticking to it ❗ 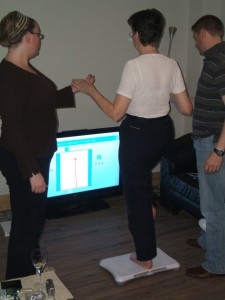 I think that told us I leaned more to the right. The figure on screen said R 54%.