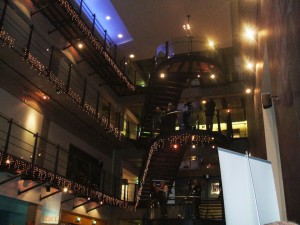 There were a few people about. 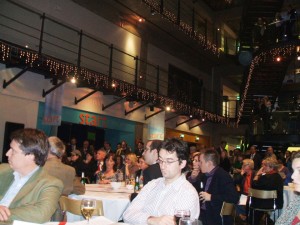 I attended the inaugural Slugger Awards “Promoting a conversational politics in Northern Ireland.” The awards were presented in the atrium of W5 in the Odyssey in Belfast.

Slugger O’Toole has been following Northern Ireland politics since June 2002. It is the oldest political blog in and about Northern Ireland and is read by Journalists, Political Professionals and bloggers with 23,000 unique visitors every month. Founded by Mick Fealty, it now has a team of regular bloggers contributing to the site. Slugger O’Toole is a place where the Blogosphere and Main Stream Media merge. 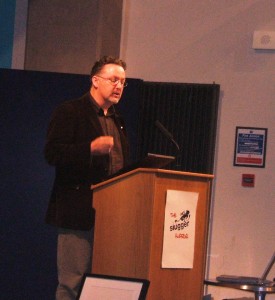 Mick Fealty giving us a little history of the blog and how the Awards came about.

The ten Awards were:

I was invited by to join the table of Channel 4 TV who were one of the Sponsors of the evening and Stuart Cosgrove and Ewan McIntosh presented two of the prizes. Paul Smith of WIMPS who provided the video clips to precede each Award, and also made one of the presentations was seated beside me and he was a pleasure to talk to. There was a laptop on the table and later I discovered that it belonged to this guy and perhaps I was sitting in his seat – 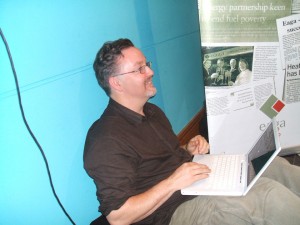 He looked quite comfortable down there as he live blogged his own event!

Thank you Mick for the seat and it was a great evening and very professionally organised.

I also spoke to Davy Simms who supplied a Podcast of the event and to Alan In Belfast . Finally a big thank you to Mairin Murray who looked after me so royally. It was great to catch up with you again Mairin. 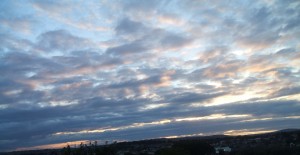 What do you see from your window?