We all love to get a letter. Nowadays they come in ones and twos and are usually bills that require payment. Recently the letterbox rattled. When I went to investigate there was one lonely item lying on the floor!

This letter was from Help the Aged and it began

It was unsolicited, a plea for money! We all get letters like these and particularly from September to Christmas. Charities are very slick nowadays at focusing their campaigns to hit the guilt spot as we begin to turn our mind to the annual spend-fest that Christmas has become. It is impossible to help everyone. Personally I decide at the beginning of the year which charity to support for the twelve months, so letters like this are torn up and thrown in the bin or fed into my paper shredder

As I opened this letter a page fell to the floor. Picking it up I saw that on one side was a picture of the reverse side of a photo frame with a sticker attached. I decided to read on…

This letter, as you’ll have gathered is about loneliness. I’ll be honest; I find it almost impossible to put into words how painfully isolated many older people feel, especially when all their friends and family have either moved elsewhere, fallen ill or passed away….. 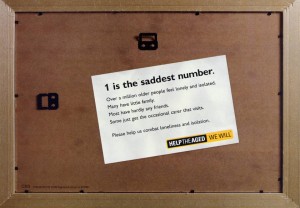 The sticker explained why 1 is the saddest number. It is enough to make you weep!

Turning it over I found the front of the frame: 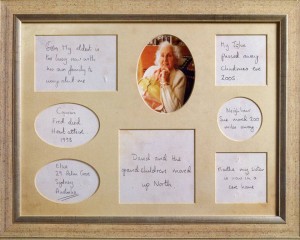 In the centre of the collage photo frame is a stereotypical image of an older lady; sitting in her high back chair staring into the distance. Around her instead of photos are little notes about the people whose pictures we would expect to find in such a frame.

It made me think! How many people are like this living alone and lonely?

I made a frame of my own: 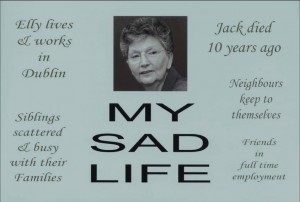 It was not very different. A very dull sad life… You would almost feel sorry for me.

When I was young very often there were three generations in the one house. It meant that there was always someone to talk to and interact with. The younger generations asked for the advice of their elders and the elders helped with the children. Youngsters learned to deal with frailty and each generation learned from the other and relationships deepened and all felt needed.

Nowadays the older generation remains at home or goes into residential care. The young people move away to study, follow careers, and travel or start their own dynasty. The older generation become imprisoned not by other people but by aging bodies, stiff limbs and breathing difficulties.

This to me is a form of poverty.

Not cash poverty, but one of time and attention. The modern working hours leave little time to travel and check up on the older generation. OK so they probably have television, but how many times have you heard the phrase ‘There is nothing on, only rubbish!’ If you were forced to stay indoors for a week never mind for a year; how would you like to have TV as your only company?

There is a way to help the situation. To eradicate this poverty.

Encourage the seniors to use a mobile phone and a computer. Remember they will be slower than your average twenty-something to learn these skills so take things slowly. Be prepared to repeat instructions, drip feed rather than expect them to devour a manual for lunch. With patience they will see the benefit. Teach them to blog and or Podcast. It is the art of storytelling. It can become a project to record a family history for future generations. Life is constanty changing and the way of life for our parents and grandparents my sound prehistoric and unreal to us just like science fiction may seem unreal to them! With recording the stories on a blog or podcast the local phrases and saying will not be lost. With a podcast the voice does the work.

Stop and think… Do you know what you’re Great Grand Father sounded like, his accent, turn of phrase or indeed his language? Now is the time to think about collecting this ‘life history’ for your children and grandchildren, while the older generation are around. It will give the older person, particularly those living alone a feeling of being worthwhile and needed! While doing family research some years ago I discovered my Grandfather’s signature on a census form for 1910 – a year before my father was born! This grandfather died in 1922 and now I know what his handwriting was like, in fact it is exactly like my fathers! I treasure that copy of the census.

For my part blogging and the internet are a Godsend. I live alone with no relations for over 100 miles. With health complications there are times when I am unable to go out. On those days the world comes in to me through blogging and the internet. Blogging has become a conversation and an introduction to new friends who are as close as the click of a mouse. My life is far from sad, the world comes in to me with a great big smile! 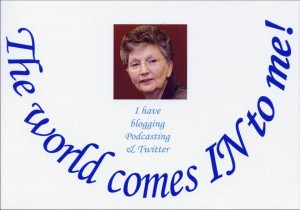 Old age brings many problems, but it is also a time of great joy.