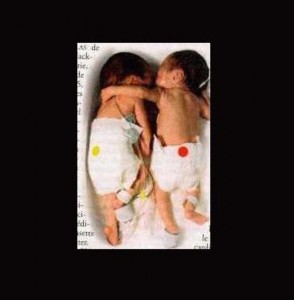 This image is from an article called ‘The rescuing Hug’ written back in 1996.

The article details the first week of life of a set of twins. Apparently, each was in their respective incubators, and one was not expected to live. A hospital nurse fought against the hospital rules and placed the babies in one incubator.

When they were placed together, the healthier of the two threw an arm over her sister in an endearing embrace. The smaller baby’s heart rate stabilized and her temperature rose to normal.

Premature babies who survive are tiny miracles of modern medicine. Kyrie (red dot) and Brielle Jackson are also examples of a far more primitive science, that of the loving touch. Born 12 weeks early, the twins were whisked into separate incubators.

Kyrie, the larger at two pounds three ounces, slept peacefully. But Brielle had breathing and heart-rate problems, didn’t gain weight and fussed when anyone tried to comfort her. Finally, a nurse tried a technique called “double bedding” and put the sisters together fro the first time since they shared a womb.

“Brielle snuggled up to Kyrie,” reports mom Heidi Jackson, “and she calmed right down.”

With her sister near, Brielle began to thrive. Sooner then expected, the girls went home – where they now share a single crib.

Give someone a hug; it might be a life saver!