Santa has returned once more from whence he came and half the countryside is now hoarding away their booty, making stock with the turkey carcass and stuffing overflowing refuse bins with wrapping paper.

Meanwhile the other half, are busy making resolutions for the new year ahead. With recession all around us we need to be careful with our spending and look after the things we have.

I am sure there are plenty of cool new t-shirts being blogged about and sported at all the ‘IN’ places and parties this year. So what is the best way to look after them? Most care labels will tell you to wash dark colours separately, and you should, otherwise the whole wash will soon become a dull grey or the pure white shirt will look like it had the Batik treatment from a red item added by mistake.

To Fix a strong colour (read reds purples and black) and prevent it from bleeding into other washing, Fill a bucket with cold water and add 1 tablespoon of salt, give it a stir and add the coloured item! Leave it for several hours or overnight. Then wash in the normal way.

The normal way for black items & that includes socks, or indeed any strong colour is to turn the item inside out before putting in the machine, then if fading occurs it is on the inside of the garment.

Worried about losing socks in the wash… Put them in an old pillow case and tie a knot in the end of it before putting in the machine. This method also works for underwired Bras.

To store Christmas tree lights, wrap them around an empty paper roll – one from wrapping paper is perfect. Cut a notch at one end of the roll and tuck the end of the string of lights into it. Then roll the lights round the tube working slowly along its length. When you come to the end make another notch and tuck the end into it.

Remove rust from a knife or kitchen utensil by sticking it in an onion for about an hour. Move the blade back and forth to help the onion juice do its work.

You better watch out!
Better not cry!
Better not pout!
I’m telling you why,
Nominations are open for IBA ‘09.

I’m making my list
and checking it twice.
I’m checking out who’s naughty and nice.
Irish Blog Awards are coming to Cork.

We read you when you’re sleeping.
We knows when you’ve a post.
We knows if it was bad or good.
If we laughed or cried or both!

You better watch out!
Better not cry!
Better not pout!
I’m telling you why,
The Awards are coming to Cork.

The Musical blogs are playing with drums,
The cooking Blogs are teasing our tums.
Photogbloggers are clicking their way round Town.

Specialist Blogs and Political too,
There’s Sports & Fashion, all waiting for you.
So cast your votes right now.

The boys and girls in blogland
will have a jubilee.
They’re going to come to Cork,
to shout & clap with glee.

So you better read up!
Better take note!
Better go vote!
I’m telling you why,
Nominations are open for IBA ‘09.

UPDATE: There are some changes to the categories this year and you can check out the changes and rules Here

Confession: I stole the Logo from Phil.

I am being lazy at the moment and going through my photos from back in the Autumn.

So today we have another picture of Graiguenamanagh. 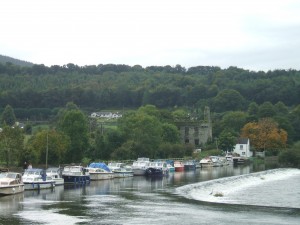 The inspiration for the ‘Town of Books’, came from Hay-on Wye in Wales and Wigtown in Scotland. During the Fair unused shops are opened up and filled with books for sale. They include books of every type: old and new, bargain books, second-hand and antiquarian books. So if you are searching for a special book, out of date and out of print, a first edition or one signed by an author, then September in Graiguenamanagh is the time and place.

Combine topping ingredients.Pour topping over cake and bake for 10 more minutes.Allow to cool, when cold cut into squares.Serve from dish.

The 28th December is the Feast of the Holy Innocents or was when I was a child. It was one of those ‘Special Church Days’ in my father’s calendar. It commemorated the memory of those infant males killed by King Herod in an attempt to kill Jesus. Being a holyday we were obliged to attend Mass.

Fasting from midnight before Holy Communion was the norm when I was very young. This meant that we were woken from our sleep very early and ready for 6 or 7am Mass. Can you imagine the job my mother had to waken five young children (it was before my sister was born), wash the sleep from their eyes, dress them and comb their hair and have them all ready to sit in the car just when my father said he was about to leave the house? In his eyes, looking after the children was my mother’s job. She did it well.

My father had a preference for Order Churches so we attended Gardiner Street, home to the Jesuits and where my older brothers sang in the junior choir. The boys always sang during the first mass of the day. Thinking about it now brings on the internal shiver that was partly from the cold air in the large building and partly from the internal shock of being woken suddenly from sleep.

Once the mass was over we returned home for a cooked breakfast. Now hold on a minute…. This cooked breakfast was prepared by mammy and she was with us. So she had to start in to cook bacon, sausage, eggs, tomatoes and mushrooms when we arrived home. Daddy sat with the Sunday papers waiting for the food to appear on his plate.

As you can imagine we youngsters were at times fractious at the table. They were the days before central heating so we were tired, cold and hungry. Sparks flew and arguments flared easily.

On one particular morning the bickering went on at the back of the table. Daddy raised his head and complained about the arguments and asked if we thought that ‘The Holy Family’ behaved like that at the table? Mammy muttered something to him and he pushed back his chair and left the room in a hurry, his breakfast forgotten!

It was years later that we learned what she said:

‘It was easy for them, they had only one child!’ 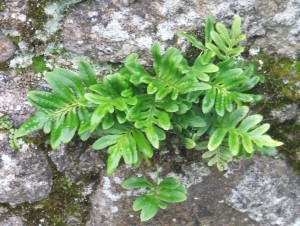 This little plant seems to be stretching out its leaves with joy.

It reminds me of the hands and hearts that opened and stretched out in welcome for me, into a home filled with a very special love one weekend back in the autumn.

This picture above and the one yesterday were both part of this wall. 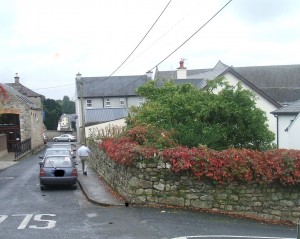 Well not quite a flower but a pretty plant. 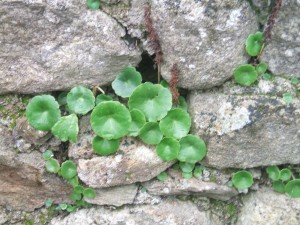 Anytime I come across a wall like this I am reminded of a poem.

‘Flower in the crannied wall’

FLOWER in the crannied wall,

I pluck you out of the crannies;—

Hold you here, root and all, in my hand,

Little flower—but if I could understand

What you are, root and all, and all in all,

I should know what God and man is.

Q: Where can women over the age of 50 find young, sexy men, who are interested in them?
A: Try a bookstore, under Fiction.


Q: How can you increase the heart rate of your 55+ year-old husband?
A: Tell him you’re pregnant.


Q: How can you avoid spotting a wrinkle every time you walk by a mirror?
A: The next time you’re in front of a mirror, take off your glasses.

Q: What do you call a letter sent up the chimney on Christmas Eve?
A: Black mail! 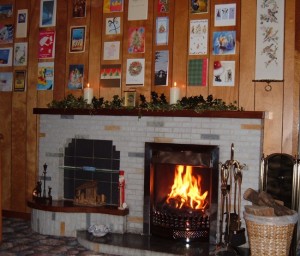 
May the spirit of Christmas bring

Peace to your heart and music to your lips.

Check you have plenty of new or recharged batteries for tomorrow.

Train a dog to stop barking. Squirt some lemon juice in the dog’s mouth and say “Quiet.”

Nuts to furniture scratches. That’s right – rub the scratched surface with the cut surface of either a walnut or a brazil nut. It will cover those scratches.

Use dental floss to temporarily replace a broken shoe lace.

To remove crayon marks from clothing or walls – use a baby wipe.