Thankfully the temperature raised its little head on Wednesday night to 3°C. That happened with a sprinkling of snow. I often heard jack say over the years that it was ‘Too cold for snow!’ Well up and until Wednesday night it was way to cold. 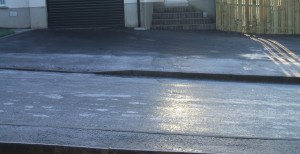 This is how the roads looked round and about where I live. Not a good idea for stepping out with my creaking hips. It would almost make you long for a surface like the old Naas Road leaving Dublin in the Kildare direction. It was made in concrete sections and you almost felt as if the wheels of the car were square, going thumpity, thumpity, thump for mile after mile.

The roads around here are all modern Tarmac and they are fine for most of the year. It is the extremes that cause the problem. On the rare occasion that we have a heat-wave then the tar becomes soft and sticks to the soles of your shoes. Alas we are more used to the conditions of this week. The roads and pavements were like skating rinks and it was impossible to keep from sliding about. The best solution I have found is to wear a pair of old socks over my shoes – in extreme conditions who cares what I look like. 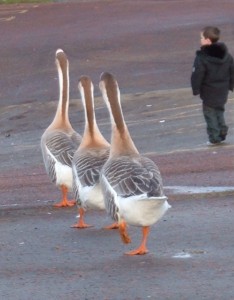 The photo was taken at Lough Neagh on a frosty day in December 2005.