My father was a pessimist and always felt the tiles of life were stacked a mile high against him. My late mother-in-law (who unfortunately I never met) came from a very different school of thought. She was often quoted for saying ‘You make your own luck’! I like that school. I have found that when I think positive thoughts, that positive things happen. At times you may have to wait in line; and then suddenly like Dublin buses, the good things come in twos or threes.

Yesterday was such a day.

I woke to find the frost of the previous five days had finally gone from my garden. This rise in temperature is normally followed with rain. Monday’s rain was lazy rain. It hung in the air like a thick layer of London war time smog! It was Impossible to see the end of the garden.

I had reason to go down the town so the debate began in my head, would I walk or drive? I hate driving in fog. The month of December brings out the worst in many car drivers they turn into accidents waiting and wanting to happen. My hip was complaining, yet it needed the exercise. Yes? No! Yes? No! The argument went on. The foot soldiers won. Out came the bright red anorak, I wrapped up warm and headed off.

The journey downhill was painful and the extra effort of side stepping dog litter on the pavements an added nuisance. I managed to complete my tasks bought a fresh loaf of muesli bread and turned for home. It was then I saw the smiling face approaching.

I knew the gentleman for about fifteen years. He and his wife Dympna moved to this area when he retired. Dympna was a talented organist and sang like a bird. Alas her health deteriorated in the last five years. He slowly took on more and more of the household chores. We often met by chance while shopping and he always had time for a few words. It has been a couple of months since we met and today his words were tinged with sadness. “I am on my own now” he informed me and went on to tell me about his wife’s last weeks. “I thought you knew” he said, but I didn’t and nobody had thought to come and tell me.

His eyes brightened as he told me that I spoke to her on her last day out in the car with him. He had taken her for a drive and stopped to buy some fruit on the way home. I was coming down the street and seeing her in the car stopped to say hello. Being a cold day I sat into the car and chatted for about 20 minutes. Eventually I went about my business and it was only today I realised why he was away so long.

As he approached the fruit counter in the supermarket he slipped on grapes that had fallen on the floor. He careered to the ground hitting his head on the metal edge of the fruit stand. Health and safety bells and whistles swung into action and the staff wanted to call an ambulance. He refused, thinking only of his wife, a non driver and unwell, sitting outside in the car. Despite his protests he was taken upstairs to the office where accident report forms were filled in and signed. More worried about his wife left alone in the cold weather he rushed back to her.

My chatting to Dympna was the perfect distraction and she had not realised that he was away so long. He was so relieved and today that relief was obvious as he recounted the events of that day. So next time you see someone you know alone, go talk to them, you may never realise the good you are doing.

My pains forgotten I walked back up the hill with new energy!

Then in the afternoon I discovered that ‘Homepages’ a unique collection of stories and photographs from fifty Irish bloggers and photographers, compiled into a fund-raising book for the homeless charity Focus Ireland was launched and being published via Lulu.com. on a print on demand basis for a mere €14. ALL the money goes to the charity, which provides services and support for people who are homeless across Ireland. 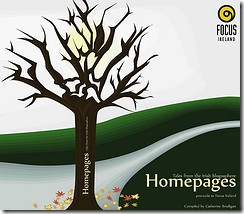 Catherine Brodigan is the inspiration behind this project and she has done a wonderful job, coordinating and compiling the final work and I am greatly honoured to be part of it. Click here to order your copy!”

UPDATE: €4.61 per copy goes to Focus (the remainder is manufacturing costs and publisher’s fee).