The day was turning to monochrome as I helped remove the anorak on an early November evening. You could feel the frost on the grey green fabric. I tugged on the elasticised cuffs as the arms were pulled away from me. All the while the chatter continued and you had to listen carefully, because she would say things only once! Soon I had the coat in my hands and despite the outer fabric of the garment feeling like ice, the inside was as warm as a furnace. I held it close to me as I looked into the glowing face standing before me. Automatically I reached out to touch the rosy cheeks and almost squealed at how cold they felt.

Taking the coat from me she headed off to hang it up and find her slippers. I went back to the task in hand. The door burst open and she was back in the centre of the floor with hands on hips, and a very determined look in her eyes.

“What do you know?” I asked as I continued to peel potatoes.

“There is no Santa Clause!”

“Who told you that?” I asked as I removed an eye from a potato.

“Well if Lucy says so, then it must be right” I say as I put the potatoes on to boil.

“There is no Santa!” she repeated raising her voice, a little surprised at my lack of interest.

With the mention of books she was away as fast as she had appeared. Books were her world and her room was full of them. No doubt with the first book to catch her eye, the topic of Santa was forgotten. It was never mentioned again.

The weeks passed. The tree was decorated, presents bought, menus decided and the shopping done. All too soon it was Christmas Eve. Little Miss said her goodnights with the usual hugs and kisses and we trundled down to her bedroom for the bedtime story. About 20 minutes later I snuggled her down, switched off the light and came away.

Once she was asleep Jack and I set about leaving out the stockings and presents around the tree.

Before going to bed ourselves we always checked on her.

That was when I found this little beauty: 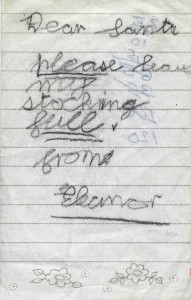