Nancy asked the other day if I would post something about Nelson’s Pillar. 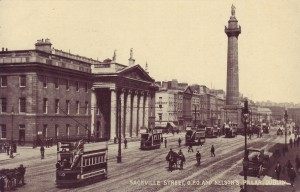 Nelson’s Pillar was the most prominent monument standing near the General Post Office (GPO) since 1808 in the centre of O’Connell Street, formerly known as Sackville Street, Dublin’s main thoroughfare. This was the original Nelson’s column pre-dating the one in London by almost 30 years. It was a 36.8m (121 ft) tall column with a 3.9m (13 ft) tall statue in Portland Stone at the top.

Designed in 1808 by the English architect William Wilkins (1778-1839), the pillar was topped by Thomas Kirk’s (1781-1845) statue of Admiral Nelson. At the time it was the tallest Doric column in the world. It contained a viewing gallery at the top, and adults paid 6d (children under 12 were half-price) to climb the 168 spiral steps to a platform which gave a bird’s-eye view of the city. The diameter of the column was 13 ft at the bottom and 10 ft at the top.

All the outer and visible parts of the Pillar were of granite, from the quarry of Golden Hill, Kilbride, Co. Wicklow. The interior was of black limestone. Originally the entrance was underground but this was moved to above ground in 1896.

The pillar became a common meeting place for those new to the City and remained so right up to the time of destruction. I wonder how many romances began with a first date starting at ‘The Pillar’. 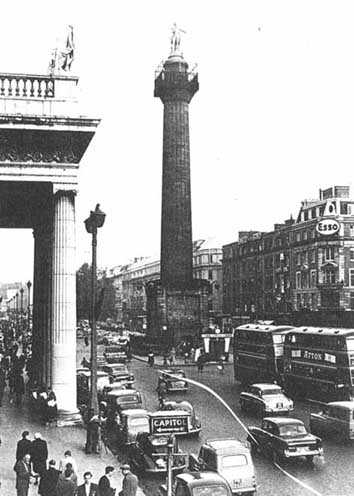 By day there was a lady standing near the entrance selling fresh flowers from a baby’s pram. She was there for years. Alongside her was a mobile X-Ray van with a loudspeaker unit calling on passers-by to ‘Come and have a free chest X-ray’, between these messages they played music! One record played over and over ALL day long – Greensleeves! I know because I worked during my school holidays for several years, at an Opticians office and the loud hailer blared right in our a first floor window!

The Pillar was an unpopular symbol of British imperialism. It was blown up by the IRA at 02:00 on 8th March 1966 as their way of commemorating the Easter Rising. No one was hurt by the explosion. The closest bystander was 19-year-old taxi driver, whose taxi was destroyed. 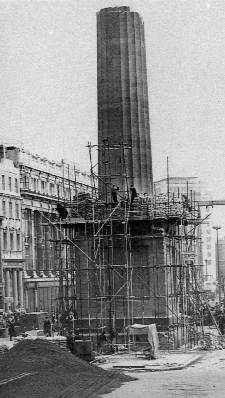 I remember the day, it was my brother’s birthday and we were both late for work because the centre of Dublin was closed to motor traffic and we had to walk most of the way to work. The IRA action only demolished the top of the pillar, causing damage to two windows in the area. Two days after the original damage, engineers from the Irish Army blew up the remainder of the pillar after judging it to be unsafe to restore. This planned demolition caused more destruction on O’Connell Street than the original blast, breaking many windows.

No action was ever taken by the police against the bombers.

Now standing on the site of the Pillar is a 120-metre tall stainless steel needle designed by Ian Ritchie and built 2003-4. Officially called The Spire, like its predecessor, it has attracted much controversy, and alternative names.