Hails at Coffee Helps tagged me for a Photo-story.

The idea is to rummage around in your photo folders in the computer, dust them down and tidy up the shelf ready for inspection.  Then open folder number four and select the fourth photo. Insert said photo  here and tell the story behind it.

Since Today is not the fourth but the sixth of February, I cheated and chose the sixth folder.  It was still up there in the ‘B’ section. 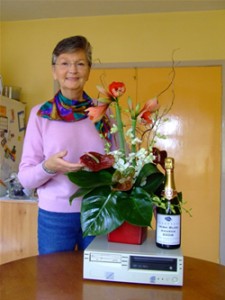 I know some of you have seen it before.  It was taken post Irish Blog Awards in March of last year.  That is me – didn’t I look young?  The camera never lies! 😉  Now no rotten tomatoes please, you are supposed to be nice to old ladies! 🙄

On the table beside me are my computer hard-drive that George my Son-in-Law had updated for me, The Champagne I won at the Irish Blog Awards 2008 and some beautiful flowers that arrived the following morning – Mother’s Day.

Towards the end of February last year I wrote the post Flower Power, it was inspired by Eamonn of Flowers Made Easy who was hosting a bloggers competition with a prize for ‘the best blog post about your mum‘.  Since my mother was dead, I told the story of another mother’s great love.  My post was not a winner but I was!  Elly wrote a post about me and told dreadful lies said nice nice things about me.  Honest, I didn’t bribe her… I didn’t know she had written it.

Well you can imagine my surprise when on Wednesday last I had a new comment on Flower Power.  It was from Eamonn telling me about another competition, this time for St Valentine’s Day.  All the details are below. 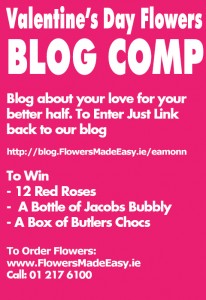 So, on with the thinking caps, and out with the pencils… if you are not in then you can’t win!  Stop and think for a moment ,about when you first realised that you were truly madly deeply in love with the light of your life; then sit and write about it.  Wouldn’t it be worth it to win the 12 Red Roses, a Bottle of Bubbly and a box of Chocs!

Now if only I had a Truelove… well I might have had a go myself!