From time to time I have written about sculptures that I have seen.

Today I make mention about another beautiful work of art.  I have not actually seen it or had the opportunity to photograph it.  In fact it was first brought to my attention by Conrad a few days ago. 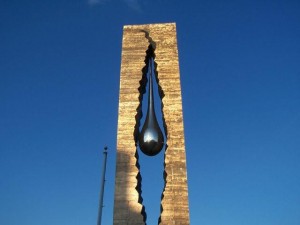 The Teardrop Monument was a gift to the United States of America from Russia, after 9/11. It was made & installed by the Russians on the fifth anniversary of the 9-11 attacks, to honor those who lost their lives that fateful day. It stands right across from the Statue of Liberty.

It is a 100-foot-tall, 175-ton, bronze-clad sculpture, which encloses a 40-foot steel teardrop, entitled “To The Struggle Against World Terrorism’ by Russian sculptor Zurab Tsereteli.

The clean simple lines of the work appeal to my eye but it is the reaching out of one nation to another that really impresses me.  Two nations who were arch enemies for so long drawn closer through tragedy.

You can find some more  photos and information here.