The Cathedral Quarter of Belfast has changed dramatically since I was last there.  New buildings are sprouting like mushrooms and the traffic has changed direction on many streets.  It took me extra time to locate a carpark facing in the direction of home.

Stepping out of the elevator, I turned to the Registration Desk and was greeted with whoops of “Grannymar, you are here!”  What a welcome from three wonderful young people at the desk. 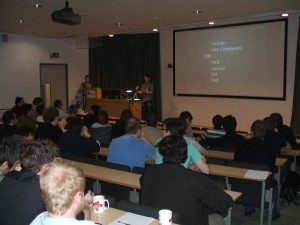 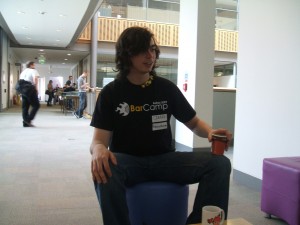 Ciarán worked like a whirlwind, yet found time to sit for a coffee & chat. 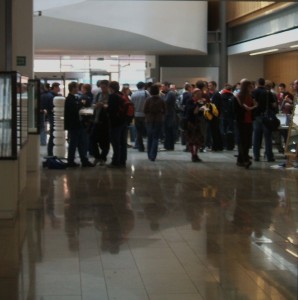 The conversation continued over Pizza in the Foyer 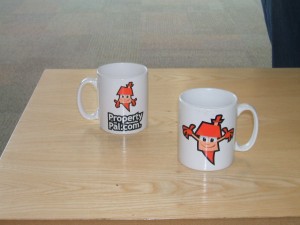 Thanks to Property Pal.com for the coffee beakers

Unfortunately I had to drag myself away early and missed the ‘afters’.  never mind there will be a next time!

Last #barcampbelfast tweet of the night – The talks were good, the event was great, but the people were f**king amazing.

Colin Parte @itsabenzbaby needs to apologize to @redmum – for mixing up our names!  My red tresses have long turned to silver, but thanks to Colin I decided I’m not getting old! 🙂

I have not mentioned all the people I chatted to or saw across a crowded room. You don’t really want a list as long as those of a Poling Station in the Indian State of Maharashtra, now do you!  There were after all between 250 and 300 turned up on the day.

* Good wishes go to Lee Munroe as he takes part in the London Marathon today.