This week I cried.

I cried for three reasons.

Perhaps I should rethink watching videos.

This first video made me cry because it might be me tomorrow.  OR it might be you!  [Give it time (Approx. 85 minutes) – Directed and Produced by Shari Cookson and Nick Doob].  If you don’t want to watch all of it there is an article to accompany it.

Thank you wise web woman for drawing my attention to it.

The second time I cried was when I watched this video on Will Knott’s blog.  Will explained:

Michael O’Brien, former councillor and Mayor of Clonmel attended the RTÉ programme Questions and Answers on 25 May 2009 and, after Minister Noel Dempsey, the sponsoring minister of the Ryan Commission report in to Child Abuse allegations spoke, Mr O’Brien spoke to the minister and to the panel.

Below is an extract I wrote in reply to an email I received during the week on the topic of abuse:

Here in Ireland and indeed the UK we are knee deep in articles about, and as a result of, this weeks report from the Commission to Inquire Into Child Abuse.  For so many it is an opportunity to now openly and for the first time accept and talk about what happened to them in childhood.

In 1996 the Congregation of the Sisters of Mercy, a Roman Catholic religious order, apologized unconditionally for the ”physical and emotional trauma” its nuns inflicted on children raised in its orphanages and schools.

I attended one of their day schools in Dublin for five years.  It was new.  They called it a College in order to charge greater fees.  I was a slow learner, a fact I constantly admit to.  On a daily basis I was caned, belittled, invited to remove my shoes and socks to use my toes for counting!  I was told I was stupid and would N-E-V-E-R make anything of myself.  I was extremely thin (6st 12ozs by the time I reached 21!) and this was remarked upon regularly in class, it was considered a cause for amusement.

The report this week does not cover abuse by diocesan clergy who are not members of a religious order, that is separate and yet to come.

If that was not enough we were regularly bellowed at from the pulpit with threats of ‘Hellfire and Damnation’!

Alas, the past week has upset me as I think of those whose lives were ruined; and for myself I feel the pull of the dark clouds dragging me back to the darkness of those early years.

Is it any wonder that Ireland is known as a nation of Alcoholics!

I did know some excellent Catholic Clergy but you could count them on one hand.

The third time I cried was for a very different reason, they were tears of laughter

Patricia, buxom blonde and alter ego of Paddy Anglican will be aided by an item belonging to Grannymar and once the day is over, and the item freshly laundered, it will be auctioned for charity.  So start counting your pennies… 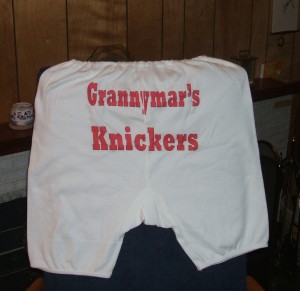