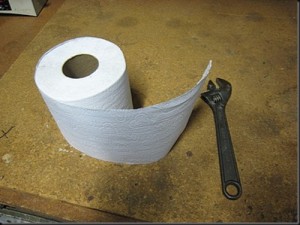 This photo appeared on Conrad’s blog the other day.  The post was entitled It All Depends Upon How You Look At It… I tried to be polite with my comment… Well my mother did her best to make a lady out of me!

Had Conrad asked us to give our very first thought on seeing the photo, mine might have been ‘Extreme Constipation’!

The specimen roll of paper above appears to be embossed with hearts.  It was a reminder to me of how this particular product has changed over the years and the uses to which it is put.  Loo paper has almost a status these days.  First off we have one, two and three ply, plain or embossed. I have also come across it coated with Aloe Vera or Shea butter. We have certainly come a long way from cut sheets of newsprint threaded onto string and hung on a nail in an outside privy. 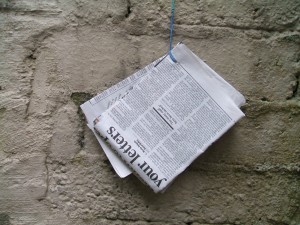 Then we have the more specialist varieties: 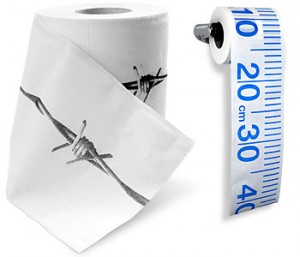 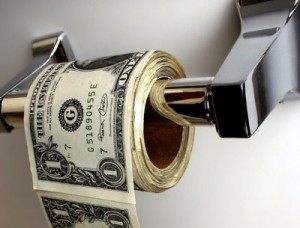 I have heard about throwing money down the drain.. but this is taking it a bit far! 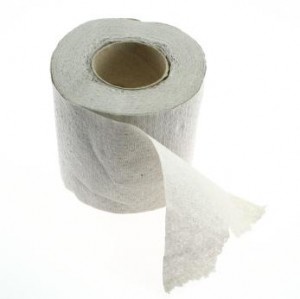 The roll above reminds me of a shop in Exchequer Street in Dublin during my childhood days.  The shop was almost opposite the Central Hotel, and I think it was called Waters.  It was an original version of a ‘£Pound’ Shop or ‘2€uro’ Shop as they are down South.  Nancy will tell us what they are called on the other side of the pond.  On fine days boxes and baskets of goods spilled out onto the street to entice the customers to come inside.  Special offers were written on the window in tennis shoe whitener.  The most popular offer (well they had it on all the time) was for seconds in loo paper!

I almost pushed my mother under a moving car one day trying to cross the road in case she decided to save a few bob on this item.  There was no way I would carry a bundle of them home on the bus.  My brothers swore that ‘seconds’ meant that they were made from second hand paper that had been washed and re rolled, no matter how many times mammy said they were the end of a run on the rolling machine and unevenly wrapped or cut. 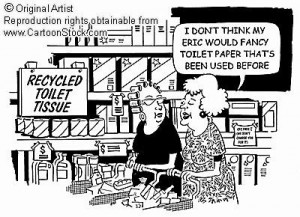 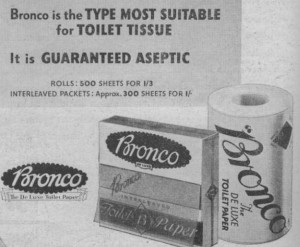 This final photo of an advertisement takes me back to the days before soft tissue.  The paper was smooth and shiny on the front and rough on the back, not what you would call absorbent.  It came on a roll or loose interleaved sheets in a box.  500 sheets on the roll for 1s/3d and for a box of 300 interleaved sheets it was 1shilling.

The interleaved sheets bring back another memory from 1959.

We, all eight of us were on holiday in England with my Aunt.  One of my Uncles wrote a letter to us with all his news.  The letter was addressed to all eight of us.  Each time someone was mentioned he drew a picture of that person with their name written on them.  I had a bow on my head and curly hair.  Mammy had an apron on and my brothers had long or short trousers according to their age.

He drew pictures instead of words whenever possible e.g. the ship was a picture of the boat, for the sea he drew waves and we also had the sun, clouds and the birds flying overhead.  It was all written on about six sheets of bronco special.  My uncle died over 40 years ago but the letter is still about.  I gave it to his eldest son a couple of years ago.  Somehow computer graphics will never be the same.

For those who are unaware of the Andrex Adverts: