It was a glorious summers day.

The sun was high and so were my spirits.  It was the dawning of a new life.  I woke early and quietly set about pressing my outfit for the day.  The outfit was bought months earlier and spent the intervening time rolled in a ball and stuffed in a weekend case on top of the wardrobe!  Freshly pressed I hung it in readiness at the back of the bedroom door.

The household was at this stage coming to life so I made my way down to breakfast.  I met brother No. 2 on the stairs, he was on his way up with breakfast on a tray for my father. In the kitchen my mother was finished eating and ready to keep her appointment with the hairdresser.  My sister-in-law (sil) stood to pour me a coffee and offered to make some toast.  The chat was sparse and in hushed tones…. it almost had a funereal feeling about it.  You know, when people whisper in case they waken the corpse.

Once the dishes were washed the kitchen cleared my sil and I headed for town to have our hair done.  It  was soon time to return to the house where I applied my mother’s make-up, sorted my sil’s cut shins, calmed my father and dispatched Brother No.2 to collect Jack from where he was staying.

Brother No. 4 arrived and took my mother and sil to the church, leaving my father who was pacing the floor, and I in my semi dressed state to the silent house.  Brother No. 4 would lead mammy to her pew and then return to collect my father and I.  It was time to don the outfit.  As I moved to reach the hanger there was a knock on the bedroom door.  It was Brother No.1  He had dropped his wife off at the church (8 minutes away), spoken to Jack and came to have a quiet word with me.  He hugged me (the only one I had by that stage of the day) and he wished me all the happiness in the world in my new life.  He told me that Jack was waiting for me and he looked happy.  With another squeeze he was gone and I stepped into my outfit.

Descending the stairs, my father was still pacing the floor.  He turned and the words he offered were “Is that you ready now”? 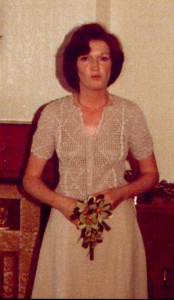 Making sure I had no lipstick on my teeth.

Brother No 4 had the car turned and the doors open for us so off we went.  8 minutes and we were at the Church.  Brother No.1 was at the door to meet us.  Brother No.4 was with us.  Suddenly, my father who had poor health, said

I think the boys were half expecting this, so after five minutes discussing the various options my father said he would walk me up the aisle.  It must have looked like a real comedy piece with a brother walking up each side aisle, pace for pace with my father as he walked the nave with me.  The idea was that if he became unwell, one brother would take him out and the other would walk me up to Jack. 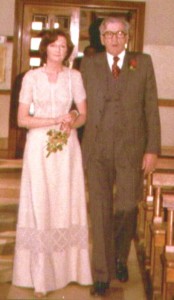 I was passed over to Jack and as we turned to face my Uncle who was officiating, the Angelus Bell rang.  It was 12 noon.  My uncle smiled as he greeted us remarking aloud about us getting the time spot on.

Very soon the Marriage Service was over and we were on our way back down the aisle and on to the house for the party in the back garden. 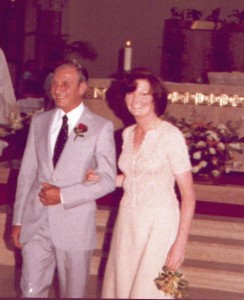 We had a small wedding by choice – immediate family only – 24 in total turned out that day.  My mother wore the same colour as I did.  My sister wore white and five of the ladies, three of them sister in laws, wore pink!  So much for communication and consultation.

That was 32 years ago today.

I mentioned the day once before here.

Marriage is certainly about more than fancy outfits, new hairdos, walking aisles and big parties….  There is of course the everyday living with the quirks and habits of those we marry to deal with.  Even today when I hear a man whistle it is a reminder of Jack and enough to pull me out of a daydream.

The following video is sad but I hope you will see the funny side too.  It is what makes life real.  I stole found it at Alice’s My Wintersong

One night, Celia and her husband were sitting in the living room and she said to him,

‘I never want to live in a vegetative state, dependent on some machine and fluids from a bottle. If that ever happens, just pull the plug.’

He got up, unplugged the Computer, and threw out her wine.

Somehow I don’t think that was what she had in mind…….

Sometimes you got to love emails! 😉