On the BBC, they refer to the summer months as the silly season. Our UK Parliament goes into recess, and the boys at the Beeb seem to think that the world of news has hibernated. In order to justify the licence fee, they scrape the dregs of the barrel for stories to fill the early morning programme from 6am to 9 each weekday.

The other day they told us about Ranchers in the good old US of A, that are now docking the tails of cows so that the farmers who milk them, are not fanned by a warm wet and fragrant fertilizer filled tail, as they work. “Holy Cow” (with due apologies to the anarchic Hindu), what will they think of next? 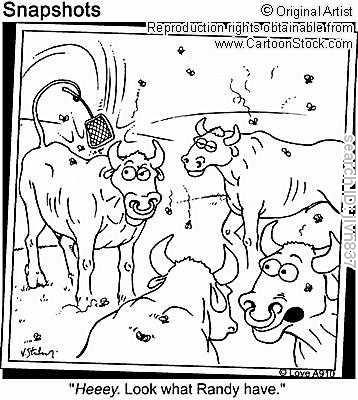 The boys at the ‘Loose Consortium’ are suffering their own silly season; Global warming has gone to their heads.

It all began with ‘Ramana the anarchist’, causing a stir here on my blog, about my shapely legs! For penance I set him a task to give us an essay on Ganesha on his blog. Off he went with his tail mouse between his legs to make reparation. Conrad got jealous at the lack of attention, so he invented ‘Tony, the God of holy water’!

Ashok, our legal eagle is busy with his nose in his books to keep me on the right side of the law, while Maynard, who does not have a blog, announced that he would be scratching his back on a tree. Funny stuff this back scratching….. Now I know he likes playing out on the range, but I can feel it in my water, and Ireland is full of water, that his range is very broad. 😉

I am stirring my pot, a slow process and in the mean time I leave you with this wise old Elephant….

The Blind Men and the Elephant

It was six men of Indostan
To learning much inclined,
Who went to see the Elephant
(Though all of them were blind),
That each by observation
Might satisfy his mind

The First approached the Elephant,
And happening to fall
Against his broad and sturdy side,
At once began to bawl:
God bless me! but the Elephant
Is very like a wall!

The Second, feeling of the tusk,
Cried, Ho! What have we here
So very round and smooth and sharp?
To me ’tis mighty clear
This wonder of an Elephant
Is very like a spear!

The Third approached the animal,
And happening to take
The squirming trunk within his hands,
Thus boldly up and spake:
I see, quoth he, the Elephant
Is very like a snake!

The Fourth reached out an eager hand,
And felt about the knee.
What most this wondrous beast is like
Is mighty plain, quoth he;
‘Tis clear enough the Elephant
Is very like a tree!

The Fifth, who chanced to touch the ear,
Said: Even the blindest man
Can tell what this resembles most;
Deny the fact who can
This marvel of an Elephant
Is very like a fan!?

The Sixth no sooner had begun
About the beast to grope,
Than, seizing on the swinging tail
That fell within his scope,
I see, quoth he, the Elephant
Is very like a rope!

And so these men of Indostan
Disputed loud and long,
Each in his own opinion
Exceeding stiff and strong,
Though each was partly in the right,
And all were in the wrong!

So oft in theologic wars,
The disputants, I ween,
Rail on in utter ignorance
Of what each other mean,
And prate about an Elephant
Not one of them has seen!

I have no idea where I found this poem it has been in my archives for some time, waiting for just the right moment.

16 thoughts on “Back Scratching!”