Not all projects go the way you want them to.  I suppose you could say it is a little like blog posts.  The same BLOCK hovers over the brain like clouds hiding the sunshine.  That happened  to me before Elly’s wedding.  I suppose I was submerged in her actual outfit and the alterations I needed to make in the last couple of weeks before the big day. 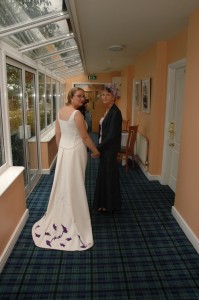 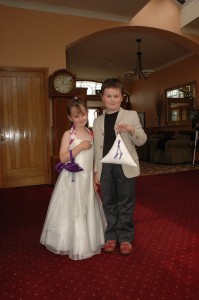 These two youngsters, George’s youngest niece and nephew were only added in to the Bridal party a few weeks before the event and they chose what they wanted to wear to the Big Party.  The tassels at the base of the bags matched one on the end of the Bride’s bouquet.

I wanted to make a little bag to hold the ‘Somethings’.  You know the something old, new , borrowed and blue.  That is where the cloud descended and several attempts failed.  I ended up sitting up in bed at 6am on the morning of the wedding finally pulling something together, beads and all! 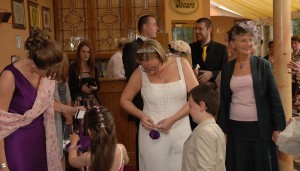 The tiny bag was held in place on the outfit by two antique glass buttons that were given to me many years earlier. 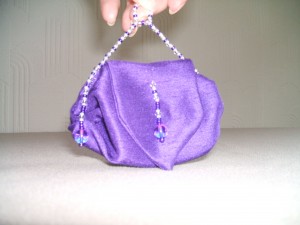 Counting the wedding outfit as the ‘New’, I added the following Old, Borrowed and Blue. 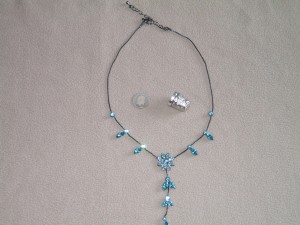 Old = A coin.  Borrowed = A silver thimble of mine.  Blue a modern necklace.

The coin is indeed old, a silver threepenny piece dated 1902. 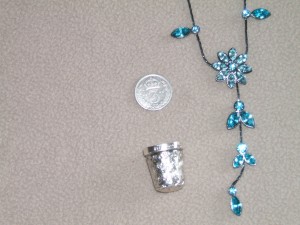 The coin had come from Jack’s Aunt Nell who had looked after him soon after birth because his mother was very ill.   A second long spell staying with Aunt Nell, made the bond stronger and she looked on Jack as the son she never had.  She had three of these threepenny coins and they were earmarked for her two daughters and her special ‘son’ jack!  He never got his coin.  On my second visit to Durham, Aunt Nell gave it to me.  Jack was delighted, it showed that I was really accepted as one of her family.  I was delighted to pass it on to Elly on her special Day.