On the 10th of July this year four intrepid souls, coaxed by our leader Conrad, saw the launch of the Loose Bloggers Consortium. Now with the speed of lightening we have doubled our numbers to eight.  It is wonderful to read the different takes on one word or phrase every Friday.  A little like looking across a valley at the view, eight people all standing in a row looking in the same direction, each one seeing something completely different.  I wonder who will be the next to add their name to the list.

Nick…  What about giving it a whirl?

The topic for this week – speed – was chosen by Marianna.

For the past year or two there has been a great lack of speed in my life.  As the months passed pain made movement difficult and my days of attempting to run, walk quickly or climb stairs one step, never mind two steps at a time became a dim memory.  Age was catching up with me.  I began to accept that the face in the mirror really spoke the truth, facial lines were curling down, I took on a haggard appearance and the hair was becoming dull and grey with every wash.

Then a few months ago I was given hope… I was placed on a list for hip replacement, which took place almost four weeks ago.  With the surgery my pain evaporated, smiling became automatic and magically my hair was easier to manage and somehow the colour was not a problem.

To encourage me, Nurse Hitler Elly bought me a digital pedometer – well I think I was an excuse to buy the little console that came with it.  It has games you see.  There were actually two little pedometers, she wore one and I attached the other to my waist.  Out we went for my first walk…. It was the length of three bungalows to a corner.  Turning, I slowly worked my way back uphill and home.  Eager to tell me how I did, Elly did the technical waving and clicking to call up the numbers.

It didn’t register one step.  Elly checked the pedometer she was wearing and it had recorded the correct number of steps.  We tried the second time, again nothing.  Thinking my footfall was light we attached it to one of my crutches, again nothing, while Elly’s worked normally.  We decided my lack of speed was the problem.  I was walking far to slow for the steps to count.  We tried it on a friend and it worked.  We attached to George and it worked.  It was just me and my very slow pace.

Elly continued to wear hers and she tried to match my pace.  Each day we increased the stride a little further.  She checked each time we returned and the steps were counted (even the pedometer was scared of her!).  I was getting somewhere; I was slowly increasing the steps with every outing.

Yesterday she had a new chant: “Distance or speed?”

I don’t remember which we chose but it registered 800 steps!

Hare or Tortoise, I am happy at the moment. 😀

Give it a week or three and the Toy boys better be on the starting blocks!

I wonder how long before these items are obsolete? 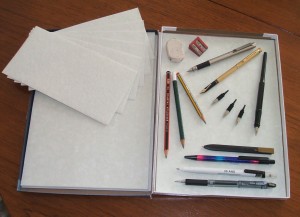 I am off to chew on my pencil for inspiration for the LBC post.  See you at 5pm (my time).