Are you tired of bags yet?

I have one more and a little extra.

This bag was a rather last minute affair.  It was to wear with a plain dark ankle length summer suit.  I only needed something small to carry my emergency kit, a small change purse, a lipstick and a large handkerchief.  It would be an emotional day and I had kept a special handkerchief for such an occasion…. The handkerchief belonged to Jack.

Fills and flounces were never my scene and a plain suit without decoration was what I was after since the proceedings involved a walk; and it was only right and proper for me not to distract from the person beside me.  It was after all her special day.  This person was not alone the centre of attention, but the centre of my world.

Have you guessed yet?

Yes!  It was Elly’s wedding day and I was ‘giving her away’! 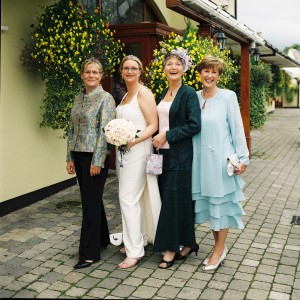 Elly with her three mothers!

I think I would be correct in saying, that for any Mother of the Bride, the Outfit is the first and most important item on their shopping list for the big day, followed by hat, shoes and bag.  For me it was headgear.  I knew I wanted something for my head, not necessarily a full hat, but something to wear at a tricky angle – a hat tip, pun intended, to both my mother and mother-in-law, who were both involved in the millinery business during their early lives.  I began collecting feathers from the time Elly & George became engaged. Once again a picture was forming inside my head…. 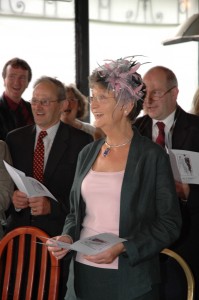 Three months before the wedding I was in Dublin staying with Elly for a few days. The plan was: a fitting for her outfit, attending a function one day and a shopping trip to look at mother of the bride outfits.  So we eventually found time to go shopping.  Within one hour we were on the way home with half an outfit.  The usual story… they had a skirt in my size but not the jacket.  Phone calls to branches in Belfast and Edinburgh brought the promise of the correct sized jacket for me being available in the latter.  I was assured it would be delivered by courier within two days of my arrival home.  It arrived.  I hung it on a hanger for three days and finally decided to make a small alteration to the front of the jacket, changing it sufficiently to make it unique.  A week later I found the pink top and my shoes.

I used pink Sinamay, the same tone as my top, to form a layered bow which I attached to a side comb.  This became the base of my Fascinator.  Then the fun began adding wired beads and then placing the feathers into the Fascinator.  I bought a Styrofoam head stand and pinned the Sinamay bow in the position I wished to wear it.  Then I worked slowly with a tweezers and superglue adding the feathers – not a job you do in a hurry, or with children or animals about.  I also had a magnifying glass at the ready for the tricky little feathers.  It took several hours to produce the effect I desired.  I left it to sit out and air dry for about three days.  It was only then that I tried it on.  I was happy.

All the while I was working on Elly’s outfit.  On a trip to Belfast for some extra beads, I overheard a conversation…   It was like a light being switched on.  Another customer had an envelope clutch bag that she had made and wanted advice on a suitable shoulder strap for it.  In a shop like that we are usually like-minded customers willing to share ideas and help.  I joined the conversation with several ideas that the owner had not thought of.  We learned from each other that day and I came home with inspiration for my bag. 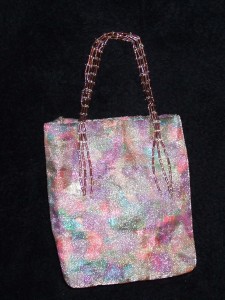 I mentioned last week about a bag shaped like a gift bag and that came back to me.  The fact that I had one sitting on the table may have helped.  Opening the seams carefully I had my pattern, all I needed to add a seam allowance.

I was back to making a fabric again.  The base I used this time was medium felt. Over this I placed a layer of muslin and yes you guessed it small scraps of silks and organdie in bright summer colours.  The sparkle over fabric toned them down a little.  I held the sandwich together with a grid of plain machine sewing in a silver metallic thread.  One idea was to cut away the upper layer in some of the squares (I tried it on a sample piece, but quickly rejected it).  The handles I made with three rows of beads leaving the ends free to move.  I had two large press studs as closures on the inside and I lined the bag in a pale grey to which I added an internal pocket.

I did not carry the bag for the business end of things entrusting it to my No.1 sister-in-law.  I wanted both my hands free.   It was returned to me before the photographs were taken after the ceremony.

UPDATE:  My Fascinator seemed to fascinate everyone, pun intended, and since WWW asked for a close up, I will add it here. 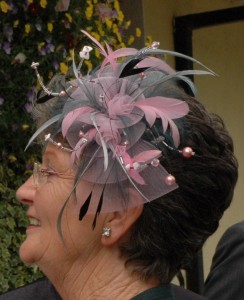 The black looking feathers were in fact a very dark shiny green on the upper side.