Today I fulfil a promise.

Many weeks ago I said I would return to the technique of Carrickmacross lace. 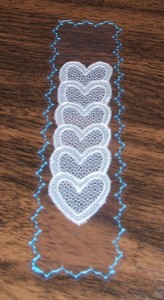 Carrickmacross lace originated in the early 1820’s and its style was inspired by some examples of appliqué lace collected by Mrs Grey Porter while on her honeymoon in Italy in 1816. She was the wife of the rector of Donaghmoyne, a village close to the town of Carrickmacross in County Monaghan.

Mrs Grey Porter saw in the craft a way to provide much needed employment for young women in rural Ireland. She and her maid learned the appliqué technique by copying the Italian work and in about 1820 they established an appliqué lace-making class which attracted a number of young women from the area. Other wealthy individuals in the area followed suit and during the famine these provided a very much needed source of income in the area.

Carrickmacross lace is an applique/cutwork type of lace worked over machine made netting. The lace is made attaching fine organdie to a delicate net ground, with the main part of design outlined in embroidery on both the organdie and net. When this process is complete the excess organdie is cut away revealing the design.  The craft of Carrickmacross lace remained strong, primarily thanks to the St Louis Convent in the town whose pupils continue to be taught the craft right to the present time. Lace makers in the area now produce lace mainly by commission and often for fashion designers.

During the time of the Great Famine in Ireland, when the potato crop failed and thousands died from starvation and fever. A Captain Morant, agent of the nearby Shirley Estate, gave the use of a vacant house in Carrickmacross town as a central school from which designs, instructions and orders for work were sent out so that the lace-making schools made a great contribution to the survival of many families.

To make your own piece of lace you will need:
Tissue paper for drawing the design, net, organdie, tacking tread (use a different colour), couching thread and sewing thread, 2 needles, 4 pins & small needlework scissors. 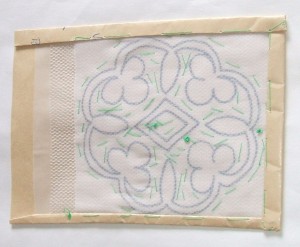 The design is drawn on the tissue paper and this provides the bottom layer of the sandwich, a layer of machine net is laid as a filling and topped with a layer of organdie.  This needs to be tacked carefully keeping the fabrics bubble free and flat.  Make sure not to cross the lines of the pattern.  The brown paper above is only to hold the sample and to show the layers more clearly. 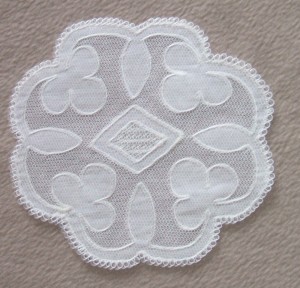 Front side of the work

When the pattern is completely worked the edge is worked by making tiny even loops all the way around the piece of work.  Each loop is double stitched to hold it in place.  The centre diamond above is finishes with a selection of hand embroidery stitches.  Then the surplus organdie is cut away close to the couching thread being careful not to cut the stitches. 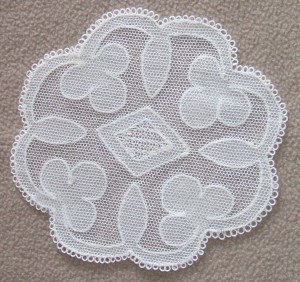 Back of the work

This is a piece of my work made a few years ago as a wedding gift. I had it framed and carried it all the way to The US. 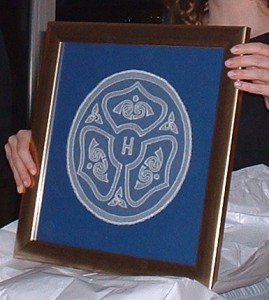 I hear it is now very much at home in a kitchen in California.