My first introduction to the family was on a Sunday afternoon in early December.  I was sitting at the table pen in hand, with notepaper, cards, envelopes and stamps all at the ready.  I heard the clink of ice in a glass and before I knew it Jack was placing a G&T in front of me.    “How many cards will you need”?  I inquired as I thanked him for the drink.  The cards were spread neatly showing the various images associated with Christmas.

Selecting a card he said “You could send this one to Aunt Nell & Alice.”

“I suppose I had better tell them that I got married” he said lifting a spare pen and the notepaper.

“Again!”  I said, adding “And the rest of it.”  As I touched the gentle curve of my tummy.

Aunt Nell was Jack’s aunt.  She was like a surrogate mother to him, looking after him for many months from birth, when her sister was very ill.  Aunt Nell had at that time a three year old daughter called Alice.  Alice bonded well with her new cousin.  She was joined a few years later by a new sister,  The three of them were always found together.  If Jack was not at home, he was to be found in Aunt Nell’s house playing with his cousins.

Alice was charged with keeping an eye on her cousin walking to and from school and again some years later when he began to attend dances.  It was Aunt Nell who quizzed Alice about the young ladies that Jack danced with.  Their paths branched when Jack went away to war in 1940.  Alice married and had a family, continuing to live in the village where she was born in Co Durham, England.

By the time I learned about them Aunt Nell and Alice were both widowed and living in the same house.  Having allowed time for the Christmas post to be delivered and the news it contained to sink in, I suggested one evening that we phone and speak to them.  From then on we kept in regular touch.  They eagerly awaited the news of the safe arrival of our precious bundle.  They were kept up to date of our progress and eventually we made a visit to stay with them when Elly was just over a year old. 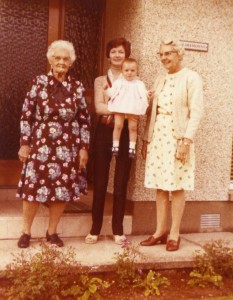 Aunt Nell Elly & GM with Alice on the right

Regular visits followed and we were always made to feel very much at home.  Aunt Nell predeceased Jack by a year, and her other daughter died eight years ago.  Last night word reached us that Alice had died.  Although frail Alice attended a party yesterday afternoon and enjoyed the singing and the afternoon tea.  While being prepared for bed she calmly and quietly died.

Alice was like a grandmother to Elly and the last link to her Dads family. 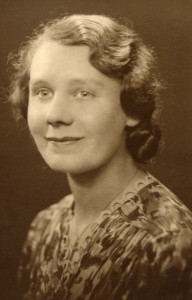