With all the miserable and cold weather we need a little light relief.

A hat is a necessary item of apparel to keep in the heat.  So today I have a hat for you.

This hat has a story to it.  I was expecting a guest to stay for a few days.  It was a first trip to Northern Ireland and he was teasing me for weeks about being chauffeur driven about for the duration.  Plans were made, meals prepared concert tickets booked and time allowed for sight seeing and eating out.

The day of arrival dawned and I was at the appointed airport in good time.  The flight arrived and the passengers came through baggage reclaim.  My guest was one of the last to reach the concourse.  His bag was slow to clear.  Once the greetings were out of the way we headed for my car.

Opening the boot/trunk to load the small suitcase, I removed a carrier bag.  As the gentleman settled into the the passenger seat, I climbed in behind the steering wheel.  Before turning the ignition key I set my chauffeurs hat on my head! 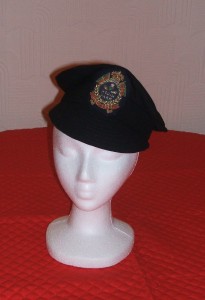 Very professional with a Crest to boot!

Not bad for an hours work.

So how did I do it?  The crown was a circle cut with a dinner plate as template on heavy interfacing and an off-cut of black serge,,, nothing but the best for me! 😆  A second circle the same size was used to cut a 3inch band for the under crown strip.  I then measured round my small head for the hat band and covered a double layer of the interfacing with fabric.  I used some green fabric to line the hat and finished the look with a bought crest that was in my work-box for a couple of years. 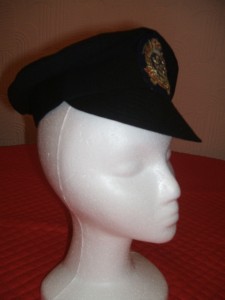 The hat is looking a little battered these days something to do with being pushed into the back of a cupboard for the last five years.  It served its purpose and proved a conversation piece, now a reminder of a very pleasant few days.