The contented band of Anu, Ashok, Conrad, Gaelikaa, Ginger, Judy, Magpie 11, Maria, Ramana and I, of the Loose Blogging consortium (Helen is on sabbatical & Ashok might be otherwise engaged right now) once more entertain us with their offering on the topic for the week, chosen today by Ramana.

Playing in the background as I type is a CD of Gregorian Chants – Sacred Hymns of Peace and Inspiration – I wonder if it will bring inspiration to my fingertips?

For some the silent life of contemplation and prayer would be the ‘Perfect Life’, and although I do spend long hours on my own, I certainly would not consider it perfect. Perhaps my fathers teasing when I was a young girl, of me joining the Poor Clares has something to do with it. His description of the life included: silence, a rough woolen habit and bare feet, waking to dig 2 feet of my own grave every day at 2am and never seeing my family again or being allowed to go home. They would of course visit once a year and speak to me through a covered grille. Is it any wonder I still have trouble sleeping!

Right! Time to change the record I think.

Back in March 1965, Ireland had not heard of the Irish Blog Awards and the great craic that that event was to become (It is such great fun that I have my bed booked already).  Instead our little nation joined the 18-strong line-up for the first time at the Eurovision Song Contest in Italy. There was fierce competition in Dublin for weeks as every showband and soloist worth their salt wanted the honour of performing Ireland’s maiden song and a free trip to Naples for a slice of the action. After a series of heats, that honour went to local hero Butch Moore with ‘I’m Walking the Streets in the Rain’. Just look at the suit, the shirt and tie… pay special attention to the haircut… my mother would give him points for that alone!

We sat round the fire and watched in perfect harmony as each entrant was announced and sang their little hearts out for their homeland. The eighteen names had been drawn out of a hat before the proceedings started and we all had special interest in the names on those scraps of paper in our hot little hands. Well at 1s. per name, the pot stood at 18 shillings! There would be a First, second and third place divvy at the end of the evening. If I won… I could buy a new pair of nylons for the dance the next week!! Ireland came sixth but I have no recollection of which countries I was shouting for, or indeed who won the pot at the end of the night. It didn’t matter; the fun was in the banter. And for those few hours life was perfect. 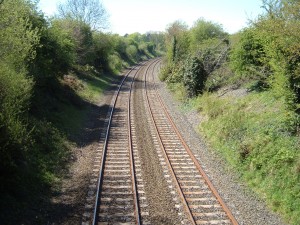 I need to make tracks if I want my post finished for 3pm GMT.