Last Wednesday was the appointed day and we arrived in good time joining in line with the others waiting to perform.

A shuttered door was raised and the lights changed from red to green when it was time to enter.  It was a large warehouse type building with modern computerised equipment to record details and speed up the process.

Our turn came and we moved forward until a raised hand told us to stop.  Opening the window I handed over the paperwork.

At this stage there were two toyboys playing with my pride and joy.  One worked from the rear connecting a hose, while I played twenty questions – avec des actions – with the other. Once the lights – side, dipped and full beam, break, fog & hazards and the indicators, all shone, blinked or flashed to prove they could, it was inside to check that all five seat belts  closed, opened and showed no signs of wear.  Before closing the last passenger door I was asked to pull the leaver to open the bonnet and then the engine was examined in detail.

Once satisfied that all was in order under the bonnet I was invited to vacate the car and sit on the cold hard seats behind protective rails. 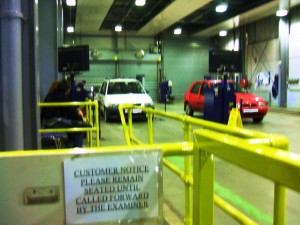 The vehicle tester then drove to stage two where first the front wheels and then the back two are dropped into the bone shaker (my name for it), I wonder if it is to find out if any parts are ready to fall off? 🙄   Nothing fell on the ground, not even the fifty pence piece I lost in the car last week. 😀

Then it was on to greater heights: 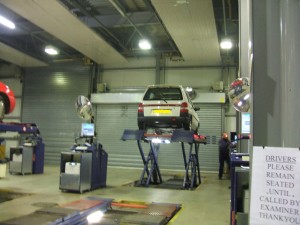 Slow down there Mister, or I will hit the roof, never mind my little treasure! 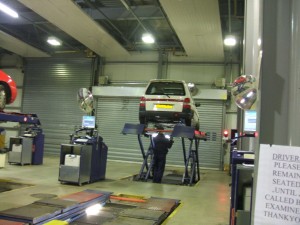 So Mister tester stepped in under my car with a powerful torch light and a screwdriver to poke and prod every inch of the under surface, the axles and the inside of my wheels.  Once he was satisfied the car was lowered halfway until the wheel arches were at eye level to the examiner.  The front wheels were turned and again the bright light and screwdriver were employed in checking everything out.  The back wheel arches were given their check over too and then the car was lowered to ground level.

Once a few buttons were punched and the details compiled, I was waved forward from my pen.  The guy had a little piece of paper in his waving hand.   Good sign!

Yes!  My little treasure passed with flying colours for another year.

“Nice little car you have there!” said the guy as he handed me the certificate.

I was one happy bunny, although frozen, as I tootled back home.  It was dark, but dry, unlike the route from Carrickfergus.  Another lady who joined me in the waiting area, said it was snowing as she drove over to the test centre.

It was 7pm when I reached home and turned the key in my door, the blast of heat was very welcome and I was ready for a warming dinner!