I returned home to a very quiet house on Friday.  When I spoke there was no reply.  I soon realised I was talking to the walls, so different to my time down south.  Over the two weeks I lunched, dined and had coffee or chatted and walked with friends and family.  A quick tally tells me they numbered 17 and that is besides all the folk I met in Galway at IBA2010.

Normally when I arrive home I let a couple of people know I am back safe and well.  Picking up the landline phone was of no help – the line was dead.  I did all the usual checks, disconnecting all the bits and pieces and then reconnecting the phone directly to the incoming connection as required.  No go, the phone line was still dead.

So it was text message, online chat or email for me instead.  Firing up the laptop, I went on line and chatted to Elly.  Next I tried the BT online fault facility and that was of no help to me either….

By the third click I was asked if the line was in use!!!!!  If I was able to use the phone line I would not be lurking about BT’s internet site.  The small print informed me that ‘In use’ included using my broadband connection.  So in order to report the fault via the internet I needed to shut down my internet connection and report from another internet line.

HOW MANY PRIVATE HOUSEHOLDERS HAVE TWO PHONE/BROADBAND LINES?

I gave Elly the link and she reported my landline fault from Dublin.  Knowing it was a holiday weekend I consoled myself that the mobile phone was working as was the broadband.  Then the latter went on strike at 10pm Saturday.  Now I had no landline phone or broadband connection.  Feeling tired I decided to close up and have an early night.

Sunday morning I was a little absent minded and tried to open my browser, only to find this window: 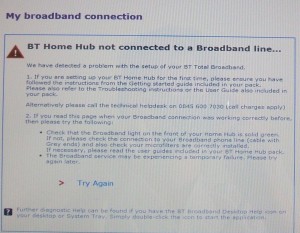 I called the phone number printed (0845 600 7030), from my mobile phone.  I am informed the number is no longer in use and given another one.  Why print a number that is not in use on a website?  It only adds to the frustration of the customer and wastes even more time.

I am immediately through to a very pleasant young lady in Mumbai.  She goes over all the things that I have already tried.  Then she wants to make some test so I ask her to call me back on my mobile phone when the test is complete.  She does. It is to announce that the fault was outside my house….. I already knew that much myself, but she quickly moved me on to the next level to a rather fast speaking fellow countryman of hers.  He repeats that the problem is outside my premises and that since I am on the priority list it will be seen to ASAP.  The line goes dead!  I am called back at the same time as an incoming text message.  I am told on the phone that the repair should be complete by Monday evening. 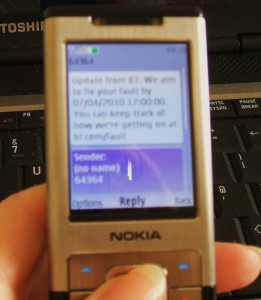 Is this a joke?  The bit about tracking the fault I mean….. how could I do that with no broadband connection?  The Wednesday part I can understand since in this bible thumping born again christian corner of Ireland Easter holidays are not like everywhere else – Good Friday through Easter Monday, oh no!  Here the holidays are Easter Monday and Tuesday!

So I sat down to take stock.  I had no working landline and no broadband.  It could have been worse, much worse.  On Wednesday I learned that some of the people in the town were without electricity since the storms on Tuesday 30th of March.  Thankfully I had power and with it – hot water, heating and was able to use my electric cooker, I was able to charge my mobile phone.  In truth it was all I needed…… well…… except I had to come to terms with my addiction!

ADDICTION!  Who mentioned addiction?  It was only a little need, you know how it is:- you click on the browser everyday and it brings in the outside world.  Even when you know it is not working you click on the off chance it will work……  You do it again…… and…… again! 🙁

On Wednesday morning I see a van cruise slowly and come to a stop outside.  The driver glances up the nearest pole and moves back down the hill.  He parks up and removes the manhole cover to the BT box of tricks. 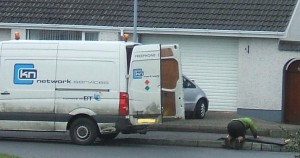 The things Toyboys do for me! 😉

Within half an hour my landline springs into action.  It is the engineer calling to say the problem is fixed and I am back in action.  Great!  I almost shout.  It is 1300hrs

I click on the browser again and it is still local access only, in other words no broadband.  I call George to let the Love birds know I have the phone at least.  He asks about the broadband and suggests that if it is not back by 1500hrs to call BT once again.

1500hrs I call BT.  This time I talk to Caz, she tries to troubleshoot the problem with me.  We are going round in circles, she won’t give up and talks to her supervisor.  She needs to do a test so I ask her to call me back when it is completed.  She does within five minutes.  We try something else, everything we try brings us back to square one.  She talks to the Supervisor yet again.  We try something else and we come back to square one.  She remarks on my patience – I am going nowhere – I want the broadband back and I am gaining blog fodder.

Eventually at 16.50hrs she decided that the problem had her beaten and that an engineer would need to call to the house to check it out further and he was booked for Thursday morning between 0800hrs and 1300hrs.  He called at 0815hrs to say he was on the way.  He arrived within 15 minutes.  One test and five minutes later he announced that he needed to return to the exchange as he thought the problem was there!

Within half an hour he phoned to say the problem was a faulty card and that they needed to find a replacement and that it would be much later in the afternoon before they would have it.  1315hrs and I am back in action.  Then I have another call from Mumbai to say the problem is solved AND that all the houses around me were affected by the faulty card!!!  Was I the only person to report the fault?  The young man told me the fault report would stay live for five days and he checked I had the correct number (0888 111 4567) if there are any more problems.

So I am back in action, but it will take me some time to catch up with all your blogs.