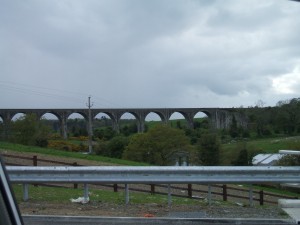 The view from the passenger window of my car on Tuesday as I sat in traffic waiting for the cars ahead of me to move.  It is another new section of the Dublin to Belfast road near Newry.  The road runs close to the railway line at this point, alas there were no trains on the viaduct when I clicked.

Conrad, Mayo and Ramana are but three who expressed an interest in visiting Ireland.  So when I received this information I felt duty bound to pass it on ASAP!

Ireland is an island to the west of Britain but Northern Ireland is just off the mainland – not the Irish mainland, the British mainland.

The capital of Ireland is Dublin.  It has a population of a million people, all of whom will be shopping in Newry this weekend. They travel to Newry because it is in the North, which is not part of Ireland, but still pay in Euro.

Under the Irish constitution, the North used to be in Ireland, but a successful 30-year campaign of violence for Irish unity ensured that it is now definitely in the UK.  Had the campaign lasted longer the North might now be in France.

Belfast is the capital of Northern Ireland.  It has a population of half a million, half of whom have houses in Donegal. Donegal is in the north but not in the North. It is in the South. No, not the south, the South.

There are two parliaments in Ireland.  The Dublin parliament is called the Dáil, (pronounced “Doyle”), an Irish word meaning a place where banks receive taxpayers’ money.  The one in Belfast is called Stormont, an Anglo-Saxon word meaning placebo, or deliberately ineffective drug.

Their respective jurisdictions are defined by the border, an imaginary line on the map to show fuel launderers where to dump chemical waste.

Protestants are in favour of the border, which generates millions of pounds in smuggling for Catholics, who are opposed to it.

Travel between the two states is complicated because Ireland is the only country in the world with two M1 motorways. The one in the North goes west to avoid the south and the one in the South goes north to avoid the price of drink.

Belfast democracy works differently. It has a parliament with no opposition, so the government is always right. This system generates envy in many world capitals, especially Dublin.

Ireland has three economies – northern, southern and black. Only the black economy is in the black. The other two are in the red.

All versions of the IRA claim to be the real IRA but only one of them is the Real IRA. The North’s biggest industry is the production of IRAs. Consequently, we now have the Provisional, Continuity and Real IRA. The Real IRA is by far the most popular among young graffiti writers simply because it is the easiest to spell.

10 things to do in Dublin 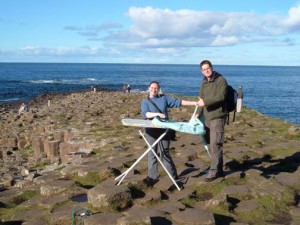 Elly ironing on the Giant’s Causeway!

With thanks to Paddy for the email!

21 thoughts on “A Political Guide for Tourists to Ireland”