This week I continue my tale of five years attending the Domestic Science classes led by Sister Mary Josephine of Fright.  Last week we covered the half that included biology, hygiene and sewing.  This week we move to the cookery class and the kitchens.

The school was new.  Although there were three classes ahead of us we were the first group to work our way right through the five years of the secondary level education system from entrance to leaving Certificate.  The cookery room was bright with a large blackboard on the end wall and in front of it was Sister Mary Josephine of Fright’s desk.  Two rows of smaller desks with locker type cupboards faced the large one and the blackboard.  Two pupils shared each desk.

This was the only opportunity we had any chance to choose who we worked with.  My pal N and I worked well together.  We are still friends and Elly looks on her as a second mother. The kitchen had three cookers, two gas and one electric.  The gas cookers were different in size.  One was similar to most household cookers with four rings on the hob, a grill and one oven.  The other one had eight gas rings on top and two ovens of equal size.  The electric oven was at the far end of the room and to this day I wonder if it was even connected to an electrical supply, since we never used it.

Our Bible for the five years was All in the Cooking Part 1.

In the first chapter, we discovered the basic kitchen equipment. Just click on each photo to enlarge. 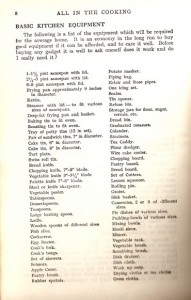 With all the cooking and baking that went on at home we survived for years without an apple corer, piping bag (we used greaseproof paper formed into a cone shape) or an Éclair pipe!  We did not have a weighing scales either.  An egg was two ounces and a tablespoon was an ounce, so a graduated measure was not required.  We had no need for a pastry board because the kitchen table had an enamel top, ideal for pastry making.

The refrigerator is becoming a household necessity – well I do remember the days of extreme heat, when we stood glass pint bottles of milk in a bucket or saucepan of cold water to slow down or prevent them from turning sour.  The lbs of butter were set on the tiled hearth in the coolest part of the house. 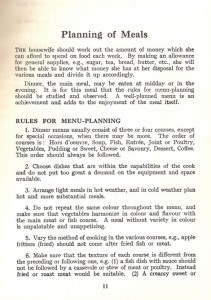 I hope you take careful note of the rules for meal planning. 😉

Now to help you, we have some helpful measures. 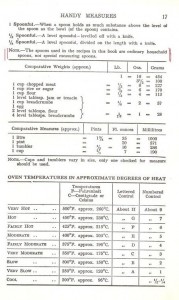 Spoon measurements are at the top of the page and they are for ordinary household spoons and not special measuring spoons.

Now we are on to the serious cooking recipes 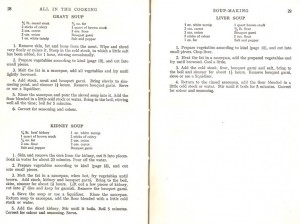 Well now you know where I found the recipe for yesterday!  It sounds almost as tasty as kidney or liver soup! 🙁 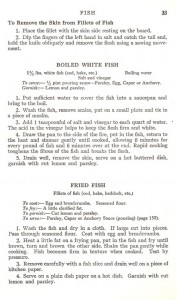 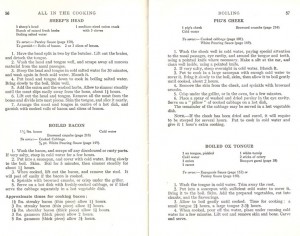 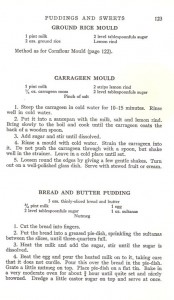 I actually had to make carrageen Mould – yes me!  I who cannot even tolerate the smell of milk!

There was only one dish we were encouraged to eat before we went home and that was scrambled egg from the breakfast menu. 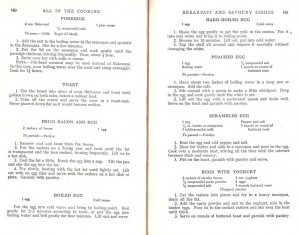 We were taught how to boil an egg! 🙄

We are coming near the end…. 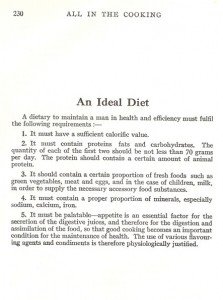 Did you read the Ideal Diet carefully?  Go back and read it again,  Now tell me where you find women mentioned!  This book was written not by one, but at least four women!!!!!

But I have kept my favourite until last.

IN VALID cookery.  OK I gave it that name. 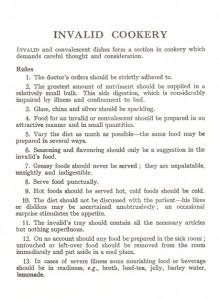 Nurse Hitler, are you reading?  I want a refund… Where was the bone china and the stamped silver-wear when you were looking after me?

There were plenty of recipes all insipid and sounding tasteless, so I refuse to include them.  In all my lifetime of looking after ill people, I have never handed them insipid colourless mush to eat.  Small morsels of tempting colourful food (on a larger plate) helps.

Maybe next week I’ll finish with tales of what actually went on in the school kitchen…..