Our Loose Blogging consortium includes Anu, Ashok, Conrad, Gaelikaa, Ginger, Judy, Magpie 11, Maria, Ramana and yours truly.  Each of us when available will contribute a piece for the topic for the week. The call of work, study or family concerns, often prevents some members from taking part on the day or indeed the week in question.  This weeks offering was chosen by Magpie 11.

Voices I recall are the ones that visited our fireside in the era before we had TV.

– An aunt and uncle who sang all the duets from the Musicals… Numbers such as Indian Love Call from Rose Marie,  I’ll See You Again from Bitter Sweet, This is My Lovely Day from Bless The Bride, Till There Was You from The Music Man and This Is My Beloved from Kismet.

– Gus and Nora who sang for Ireland at every opportunity, until the bed went on fire! (Nancy you will need the tissues again!).

But today I want to focus on a voice from outside the family:

Iris Williams spent her earliest years in a children’s home in the Rhondda Valley of  Wales.  She left school at fifteen to work in a glove factory. It was a very simple start in life. . . but she had a love which turned into a passion, which turned into a career…. that love was music.

Iris could sing… and spent many hours in Wales singing in church choirs, and eventually, with the help of several people in the valleys, in particular, Iris Llewellyn, (her music teacher) she was awarded a scholarship to the Royal Welsh College of Music & Drama.  Iris returned to the RWCMD in 1996 to be honoured as a Fellow of the College.

In the New Year’s Honours List 2004, Iris was awarded an O.B.E. for her contributions in the field of music and for her services to charitable institutions around the world.

In 2008 Iris was awarded the highest honour presented by the St. David’s Society of New York ~ the William R Hopkins Award for her contributions in the field of music and charitable institutions around the world.  Also, that year Iris was made an Honorary Member of the Treorchy Male Voice Choir, a rare honour since Iris is the only female Honorary Member of a Male Voice Choir in Wales.

For someone who had such a difficult start in life, Iris has given so much, and delighted so many.  Yes, she’s come a long way, and the concerts and other appearances plus her charity work shows no sign of abating.

Her recording of He Was Beautiful, earned her a gold and platinum disc, and an invitation by HM The Queen to perform at her annual Royal Variety Performance. 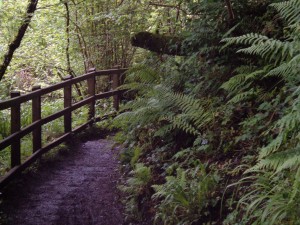 A walk at Cavehill Country Park above Belfast Castle, the photo was around this time of year in 2005.