Our Loose Blogging consortium with time grew to include:-  Anu, Ashok, Conrad,  Gaelikaa,  Ginger,  Grannymar, Helen,  Judy, Magpie 11,  Maria, & Ramana. Some members seem to have fallen off the shelf.  It would be wonderful to have them back on board and taking part each week.  We miss them.  You know who you are, and if reading, I encourage you to set the fingers tapping and join in once more.
Our topic today was chosen by my very own self!

The rain ran and danced down the window pane almost in sympathy to her own tears.  It was hard to credit that the sun had shone brightly earlier that morning.  Making the most of the light breeze and warm sunshine she scrambled across the rocks in a world made for one.  Collecting shells was a passion and today’s haul included a couple of unusual shaped specimens.  The clouds were rolling in as she crossed the small harbour and the first rain drops tapped on her shoulders as she climbed the hill to the little cottage.

This tiny house looked like a typical cottage from the front with two matching deep set windows, one on either side of a central door that opened on to a small sandy garden of rough clumps of sea grasses and space for at least three cars.  Walking through the dark front hallway of the house took no more than half a dozen steps. Stepping into the living room was like walking into another world.

The house had been extended in the last ten years and the new outer walls were actually all double glazed panels.  This large glass box was actually two rooms.  The Lounge room and a bedroom.  The dividing wall between them was made of glass with a curtain that could be pulled back during the day when the room was unoccupied.  Sitting high above the story book harbour were 180º uninterrupted views.

There was something comforting about the rain beating on the outside of the window while tucked up and cosy indoors.   The only dampness here in the room was in the glass as she sipped the wine, and the tears silently slipping down her cheeks as if to meet the deep red velvet liquid.

It was all her own fault…

She knew with hindsight that her question was badly timed.  Tessa liked an ordered life and to know exactly where she stood.  As she saw it, the situation was deepening between them even if a little one sided.  She was always available when he required her, even if it was only to answer a question and perhaps that was the problem.  On days when she needed to talk, the excuses for unavailability were many and varied, they always sounded genuine.  She accepted that he was a high flyer with fingers in many pies.

There were days like today….. she needed a little closeness and touch… her body ached to be caressed, to have the warmth of strong arms wrapped about her protectively.  He knew nothing of this.  He was not there to ease her pain, in fact he was totally oblivious to her needs, thinking that she had her life well in control.  I suppose it was her own fault.  The crisp outer shell she exposed to the world, hid the soft creamy centre, just like those eggs of the chocolate variety on sale almost year round nowadays.

Over time they shared so many conversations, talked of families and lost loves and even dipped into the barrel of hopes and dreams for the future.  Suddenly she realised while clambering across the rocks, that they only ever skipped around the edge of those hopes and dreams.  The voices of  Andrea Bocelli and Sarah Brightman singing Time To Say Goodbye, exploded in her head.

Today she would give in to the tears while listening to Bette Midler with:

Tomorrow, she would like so many times in the past, pick up the crumbs of her life and begin all over again.

She would indeed keep dancing!

Luas I am waiting! 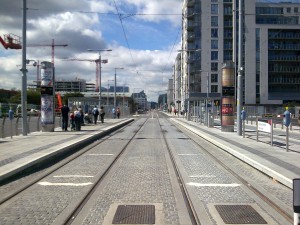 I think I see the tram in the distance.