Maybe you were expecting to see some more experiments with the aluminium cans, but the truth is that I am not a big fan of carbonated drinks.  I do have a few cans waiting to be opened and a couple of people keeping a specimen or two for me to play with, but that is for the future.

Today I have another experiment …..

I only have the one photo for you.  I did try with both the phone and the camera but it was impossible to get closer detail. 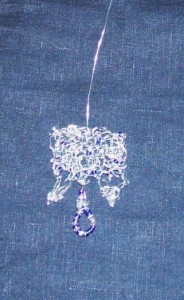 It is a sample of crocheted beading wire with beads attached.  A slow, very slow process.  It takes time to work with the wire as unlike wool or thread, the wire has no ‘give’ in it.  It is a project for an ‘untidy’ worker as the stitches are seldom uniform.

I only became aware of this technique on my recent visit to The Point Village Market in Dublin.

Perhaps my choice of beads were not the best as most of them disappear in this tiny sample.  I did have rather grand ideas when starting out but it is so frustratingly slow.  Now that is not something you hear me say very often when it comes to craft work.  I am usually happy fiddling away for hours on end and almost need an alarm clock to remind me to eat!

I will try the technique again and I see many possibilities, but there are several unfinished projects to tackle and complete before I go there.  I tell you of my successes so it is only fair to tell you about my disasters too.