In the past few months I have had several requests for suggestions of  places to see while visiting Ireland.

I love the island of Ireland and would find it difficult, and gain enemies if I tried to cover the whole place in just 1,000 words.

I could write for a month and still not cover all the wonderful aspects of my native land, so instead I decided to dip in and out of the counties, over several weeks, and include various links that you can explore at your leisure and return to many times before finally planning an Irish Holiday.

Ireland may look small and seem like you could travel from one end to the other is a day, it is in fact possible and only worthwhile if you enjoy watching the road.  The island covers 32,599 square miles, at its widest the island is about 174 miles  and at its longest (north-south) it is 302 miles.

For my friends across the pond, Ireland is about the size of the State of Indiana (U.S.). Indiana is 35,910 square miles in area.  The population of the island of Ireland is between 5 and 6 million, much the same as Indiana. 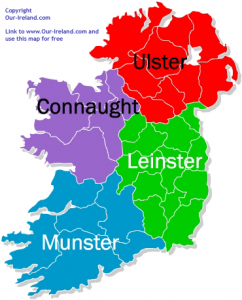 The coastline is magnificent, it extends for over 3,000 miles  and is indented by numerous peninsulas. There are mountains along much of its perimeter.  Carrantuohill is the highest mountain in Ireland. It is part of Macgillicuddy’s Reeks, a rugged twelve-mile ridge which stretches along the south west corner of the island, not far from the Atlantic shore.  Along the West coast it is possible to find hidden beaches with only the birds and the sound of the breeze for company.

So today I will stick to the basics, the information you need before any holiday to my part of the world.

The island includes the Republic of Ireland and Northern Ireland which is part of the UK.

Northern Ireland still use the Pound Sterling (£) but many places will accept the Euro.

Major Credit Cards – particularly Visa, MasterCard, and American Express – are widely accepted though some B&B’s will only accept cash. You can also use them to withdraw cash from Ireland’s many ATMs.

While on the topic of money – I suggest you guys stitch up the back pockets of your jeans before travelling.  A bulging wallet protruding from a back pocket is an invitation for nimble fingered thieves.  You have been warned!

Remember in Ireland we drive on the left hand side of the road, and all cars are right-hand drive. A manual transmission car is standard but automatics are available. EU driving licences are treated as Irish. If you’re from outside the EU its generally a good idea to obtain an International Driving Permit (IDP), obtained from your local automobile association.

Traffic speeds are in Kilometres in the republic and in MPH in Northern Ireland(UK).  In cities, it is usually best to avoid driving during the morning and evening rush-hours, especially in Dublin.

You need to relax and soak up the scenery, the people and the atmosphere, yes that includes the rain, but without it Ireland would not have those wonderful 40 Shades of Green!  All you gain from rushing about is raised blood pressure and or an ulcer,  neither a souvenir you want to take home.  Away from the hub-bub of the cities you will find the speech sl..o…w….s down and people move at a more relaxed pace.  Live it and enjoy!

So what do you need?  Stout walking shoes to begin, and dress like an onion!  Plenty of layers to peel on and off as needed.  We are known for having all four seasons in one half hour, but not for wearing green – only American Tourists do that! 😉  A waterproof layer is essential, but on occasion I have been proved wrong.  Better to have it and not need it than to be continually soaked.

Everyone speaks English and An Ghaeltacht, refers individually to any, or collectively to all, of the districts that Irish is the predominant language.  They are mostly on the west or south coasts of Ireland.

Urban Ireland became very cosmopolitan with the Celtic Tiger, with a large variety of International restaurants springing up, offering food from all corners of the globe.  The day of the token ‘vegetarian’ option is fast fading.

Starting next Sunday I hope to begin my journey around the country by taking an area or county and pointing to the high points.  If you have suggestions or questions let me know in the comments and I will try to answer or find the answers for you.  Remember that like in all things I do, I am no expert and only sharing what I know or have experienced.

I hope you will join me and enjoy the journey.

In case of emergency, Dial 999 or 112 and ask the operator for the emergency service you require: Fire, Gardaí (Police), Ambulance, Boat & Coastal Rescue, Mountain & Cave Rescue. When the emergency service answers, state the address or location at which help is needed. Calls to these services are free of charge.

Internet Café’s will now be found in many cities and towns. Prices vary.