Time once more for another episode of the Loose Blogging Consortium.   Our topic for today was chosen by me and I cannot for the life of me remember why.

All along the wall were tombstones in aged graveyard grey.  Mary Kate had blinked, and as if from a dream in the dimness of pre dawn the shadows acted like a chill breeze.

Why were there six of similar style and height standing like soldiers called to attention?  It troubled her that no names or details were etched upon the monuments to eternal rest.  It begged a question – Why?

Was this an omen or sign from the spirits calling for the next entrants to their world.  She knew that the ancient Celts believed that the border between this world and the Otherworld  became thin on Samhain, allowing spirits (both harmless and harmful) to pass through.

Six as a number did have meaning for her.  She was one of six siblings, all alive even if creaking gates. Multiplied by two and you had the age difference between the first and last. No two lived in the same place.  In fact it was several years since they were all in the one room together.

This time it was a brightly decorated and well lit fitting room area with the voice of Bryn Terfel filtering gently through the speakers with the lyrics “She was beautiful” soothing the ladies as they slipped into the latest styles for the season.

In Cubicle six Mary Kate was standing looking at the reflection of herself in a mirror. With not a hair out of place and the understated make-up she felt she did justice to this slate grey unadorned dress.  It brought to mind Jean Muir. The line was simple flowing from shoulders to hem. The skirt had a lovely swing to it as she turned.  It had possibilities to dress it up or down to suit many an occasion.  Add bright accessories and some tasteful jewellery and it would look elegant at a wedding.

She decided on a  whim  to make the purchase, after all with simple pearls it would be sombre enough for a funeral and at her age Mary Kate knew there would be no shortage of them to attend…..

Now Mary Kate was fully awake but feeling tired from the night of vivid dreaming.  Perhaps she was overtired from the long busy hours of the previous day. All the chatter about family, their ailments and the forth coming events were reasons enough to keep her brain spinning. Her world was fast losing colour as the cataracts took over…

It was becoming a very grey world!

The inspiration for this story came from Fran – Mr Foam himself and the polystyrene tombstones he made for a Halloween party either last year or the year before.  Yes Fran, You may have made Toyboys for me to sleep with at home, but in Dublin, Grannymar’s bedroom is very different.  I wonder if there is a hidden message there for me???

I am in Visual mode and click on the icon to add an image.

Next step is to choose Browser uploader, and I do.  It takes me to the full myriad of photo folders in my computer.  I choose one folder and select a photograph I wish to share.  At the bottom of the screen I click open.

I am taken back to the previous window and the code is there ready and waiting.  I click on upload, the window changes and my photo is there!

Moving down the screen I choose centre alignment then medium size.

I am taken back to Write Post page and the photo is exactly where I want it to be. 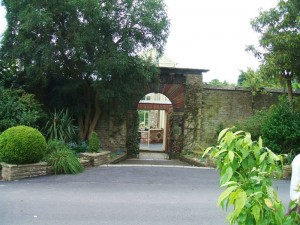 The photo should be above this line

All text is there but photo is missing.

Going to HTML mode the code is there for the photo.  Even if I decide to delete this code the photo remains in the gallery.

Is there a limit to how many photos a person can use on a blog?