Another week rolls by and once again it is time for members of the Loose Bloggers Consortium to dip their quills on a topic chosen for us by Gaelikaa:

Why Did I Do That?

I checked the dish in the oven and was satisfied that all was well.  It had a couple more hours to go at this low temperature, but from the look and the aroma I was sure the dinner would be a winner!  Turning to face the wall as I straightened up, I hung the oven gloves on their usual hook.

I had minutes before stepped out of the shower and wearing only my underwear, I tripped down the stairs to the kitchen.  Mammy was in the garden taking the clothes from the clothesline.   The house was quiet.  Daddy and the boys were at work and my friend and house guest was in his room.  It was a habit of his to disappear for an hour or two each afternoon to read or rest quietly.

It was only because I knew he was in his room that I dared run downstairs so scantily clad.  The door to the lounge was ajar, and to my horror my friend was sitting in an armchair reading a magazine on the far side of the room.  I did not hesitate on my journey, since there was no hint of awareness to my presence. I continued thinking I would be back and up the stairs without being noticed.

Alas, it was not so!

As I secured the oven gloves on the hook, I became aware of a pair of eyes giving me the once over.  My friend had seen me dash past the open living-room doorway.  There was nothing for it but to face the music and run!

I turned and was greeted with an approving raised eyebrow and broad smile.

THEN I WOKE UP! 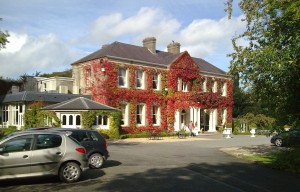 Finnstown house, the grounds are a pleasant walk when I stay with Elly.