Ramana in his wisdom was ‘the picker’ this week, for our topic of:

She knew she was in a bed.  It was not her own bed.  The room was different.  The sounds were different. Bleeps & hums – some regular others not, yet there was a silence.  No human sounds.  She was alone.

Then the questions tumbled inside her head as noisily as a pair of trainers in the dryer:
What day was it?
How long had she been here?
How did she get here?
Who brought her here?

Her nose began to itch. She lifted her arm so she could scratch the itch with her hand.  Her arm did not move.  She tried again.  It would not move.  It seemed cemented to the bed.

Then the long slow realisation…..

SHE WAS IN HOSPITAL!

Lil called out. But nobody heard her.  She tried again, and again, but still nobody came.  Feeling panic rise she screamed with every ounce of herself “HELP!”   Nothing!  She wanted to shout scream rant and roar, but no voice came.  The bleeping of the machines grew faster and louder and Lil could only lie there shedding dry tears of desperation.

After what seemed like an eternity the door opened, and Lil heard the cheerful voice of a stranger as her shoes squeaked with ever footfall crossing the highly polished floor.

“Welcome back Lil!” Chirped the nurse.  “How are you feeling?”

“You had a stroke” said the nurse “Your body needed to sleep as part of the healing!”

“Try not to worry, you are in good hands and we will take good care of you! Your family should be here very soon!”

Lil discovered slowly and hazily over the next days that she had fallen as she prepared for bed.  Thankfully she was not alone at the time and an ambulance was called.  They brought her here and she had slept nature’s sleep of unconsciousness since then.

Now began the struggle of the long distance runner.  Lil was the lady who sat in ER only three months earlier, listening to the conversation as an Orthopaedic Surgeon and assistant discussed her X-rays.  A broken arm and nose were the subject of their discussion.  She had been on her way to celebrate ‘Oktoberfest’, the fall was now described as a forerunner to a stroke.  A year later she would laugh at the memory that it happened BEFORE she had a drink!  As the broken arm was encased in plaster, she berated the surgeon for his remarks about her nose.  He had decided that at 75, it was not worth putting her through the pain to reset it.

“It is my nose, and if I want it fixed, you will do so!” she said adamantly.  They did!

So here was Lil back in the same hospital, with a stream of Drs, nurses and therapists continually appearing at her bed, to observe, question, massage, exercise and generally annoy her.  I called in with her everyday at her lunchtime.  I helped her to eat her meal and lift a cup or glass on the days when she was too weak to do so herself.

She moved her arm rather jerkily and slowly at first. A few words were possible but it was a struggle over a locked tongue.  She was indignant at having to identify nursery pictures of a cat, dog or rabbit.  “Do they think I am stupid?” she asked.  The crème de la crème was when the speech therapist held up the pen she used to write notes and asked what it was.

“No, no!” said Lois, the American Therapist “It is a Ballpoint!”

An English nurse had arrived in the room in time to hear the question.  “Sorry Lois, but Lil is correct.  We call them biros in the UK”.

One day as I arrived, the door to her room was open and I heard the sound of a voice.  Stopping outside, not wanting to intrude if a Dr was with her, I listened for a few moments.

Each word was slowly articulated, sometimes it took several efforts.  I popped my head round the door to discover Lil was alone and propped up in the bed waiting for lunch to be delivered.  She was trying to build up her verbal lexicon by saying aloud all the things she could see in the room.

With that spirit, Lil recovered and lived to cross the pond between Europe and Florida Many times, travelling alone from daughter to daughter until her demise at the tender age of ninety five.

Several times a year her daughter and I would head off for a long weekend to break the monotony of the work routine.  Lil always came with us.  At the first mention of a few days away, Lil’s eyes lit up like beacons and she had mentally packed her bag before the sentence was finished.

My father would turn in his grave faster than Revolving Flaherty if he saw this: 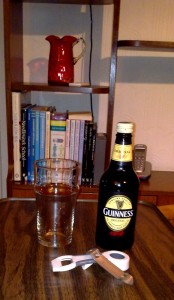 A bottle of Guinness with a screw cap!