County down has a coastline along Belfast Lough to the north and Carlingford Lough to the south (both of which have access to the sea). Strangford Lough lies between the Ards Peninsula and the mainland.  County Down is where, in the words of the famous song by Percy French, “The mountains of Mourne sweep down to the sea“, and they are renowned for their beauty. Slieve Donard (2,785 ft) in the Mournes, is the highest peak in Northern Ireland.

The Ards Peninsula is home to many treasures that include Mount Stewart House, built in the 18th century and now owned by the National Trust.  Set in an exotic garden it houses a fine collection of art and furniture.

Greyabbey is a small village situated on the western shores of Strangford Lough, on the Ards Peninsula. Grey Abbey, a Cistercian Abbey, from which Greyabbey probably derives its name, was founded here in 1193 A.D, is located on the northern edge of the village nestling in a beautiful park land surrounding. Unfortunately Grey Abbeys’ annals do not survive but what little history is known is non-the less intriguing. Full details and a picture gallery of the Abbey can be found here.

Portaferry is a small village at the tip of the Ards Peninsula with an attractive waterfront of colourful terraced cottages, pubs and shops. The Marine Biology Station, part of Queen’s University, Belfast, is situated opposite the ferry jetty.  Close to the tower-house is the Northern Ireland Aquarium – Exploris, a premier marine life centre and aquarium, featuring walk-through tanks which house examples of Strangford Lough’s marine inhabitants.  The lough is host to large fish, including tope and skate.  A regular 5 minute car-ferry service links Portaferry with Strangford and gives stunning views of the lough.

Strangford is a small village with two bays, pretty houses and a castle  Castle Ward is an 18th-century eccentric house with two distinctly different styles, classical and Gothic. This 332-hectare (820-acre) walled demesne, with walking trails, exotic garden, stunning vistas and picturesque farmyard, will take you through family history, leisure pursuits, events and industrial heritage. A children’s pastimes centre and laundry room are a short walk from the house in the stableyard, alongside a gift shop, second-hand bookshop and tea-room.

Killyleagh Castle, I was fortunate to have a private tour of the castle a few years ago.  It was lovely to visit an occupied home like this.

The Gardens and Tropical Butterfly House are situated in the historic demense of Seaforde in County Down,   which has been a family home for almost 400 years. Experience the beauty of free-flying tropical butterflies, visit Irelands oldest maze or relax and enjoy the fine collection of trees and plants in the gardens.

Down is named after its county town, Downpatrick.  Saint Patrick is reputed to be buried at Down Cathedral circa 461 AD.  The Memorial Stone placed there in 1912, traditionally marks Patrick’s grave.  There has been a church on the site since 520 AD.  The present building was built in 1183 as a Benedictine Monastery, it has been restored many times and became a Church of Ireland/Anglican Cathedral in 1609.  The building contains beautiful stained glass and rare stone carvings.

St Patrick Centre & Down County Museum tells the story of our patron saint.  It is situated in the historic buildings of the 18th century Goal of Down and has hands on activities and lively events.

The area of County Down between Rathfriland and Banbridge, is known as the Brontë Homeland where Patrick Brontë had his church, he was father of Anne, Charlotte, Emily Brontë, and Branwell Bronte. Patrick was born in this region.

Castlewellan Forest Park offers diverse woodland in an area of natural beauty.  A peace maze opened in 2001. The circular walk around the lake in front of the Castle is particularly good.  The Castle is now a Christian Conference Centre.

The author C.S. Lewis loved the Mournes and it is thought that he based his depiction of Narnia on the peaks, valleys and forests of these ancient mountains.  The silent valley reservoir is circled by the range and is home to beautiful parkland, lakes and a pond.  A shuttle bus runs from the car park to the older Ben Crom reservoir during the months of May, June and September.

Tollymore Forest park  was the first state forest park in Northern Ireland, established in1955. It is located at Bryansford, near the town of Newcastle. Covering an area of 630 hectares at the foot of the Mourne Mountains, the forest has four walking trails signposted by different coloured arrows, the longest being the “long haul trail” at 8 miles long. The Shimna River flows through the park.  . The Forest Park is now owned and run by the Forest Service NI, part of the Department of Agriculture and Rural Development

I am running late with my regular post today.  I’ll be back later to cover the glories of County Down.

In the meantime a view of Donaghadee Lighthouse form a small harbour in the County. 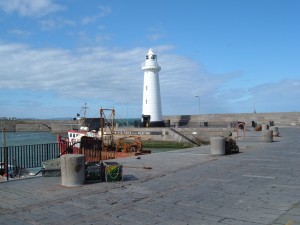