Been there, done that, but got no tee shirt!

No. Don’t feel sorry for me.  My day was full of surprises and I came home on Sunday, laden down with goodies, I thought George was going to charge me for excess baggage with all the booty he packed into the car. He had to carry all the bags because my arms ached from all the hugs!  Even the lovely Karen @stwidgie and Mr Karen brought me birthday gifts from Chicago.  It was wonderful to meet then and only sorry that we did not have more time.

So, as the song says, Where do I begin?

How about a link to the winners of the 2011 Irish Blog Awards.  The months of preparation and organising by Damien Mulley and his army of helpers means that this part of the proceedings is always casual and great fun with lively participation from the audience.  It seems to pass in a flash and then it is time for the party, the pints and the stories to begin.  A hot buffet provides sustenance for the hungry hoards.  This year we had the added bonus of delicious cupcakes.

In the past few years the Irish Blog Awards has become more like a weekend of events. This year they began at noon on the Saturday and continued until Sunday afternoon.

I was unable to attend the Bestest Photowalk in the world – The IBA Belfast Photowalk organised by Davy McDonald began at noon.   The man is a real trooper also organising a two hour Bus tour of Belfast with lunch all courtesy of the Belfast Tourist Board.

There was another pre-event meal called Blog Awards Bites at Cayenne in Belfast.  This was organised by Walter Higgens.

The Ladies Tea Party organised by Sabrina Dent and sponsored this year by BAGglitz.com included food, wine, dessert and swanky swag bags was a smaller affair this year, but it gave us the opportunity to really get to know those who attended.  As a result of that event we have at least one new blogger on the map.  I felt like a child at Christmas when I opened my Swag bag.  We had treasured that included

Do you really want to know what I was up to at the Awards?   I shared my musical talents and dancing skills!

I told you already that I wanted to meet Ike, and I did.  I am sure that you would like to meet him too. 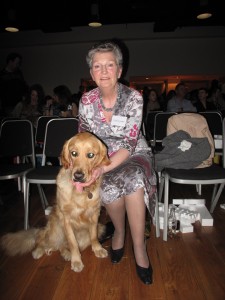 Ike out of harness came to say Hello. 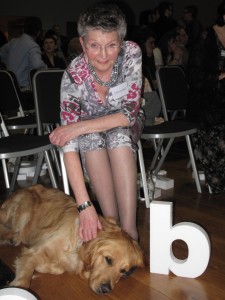 As I was leaving the hotel on Sunday look what happened 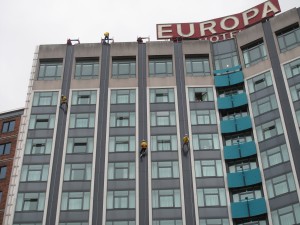 Toyboys trying to escape!   Not really, it was a 130ft abseil down Belfast’s Europa hotel in aid of charity.  All the photos are courtesy of Digital Darragh and Ike